Major to great magnitude earthquakes (6.0+) have increased to more than one quake every two days during the last 16 months on average. This is unprecedented and a fulfillment of last days Bible prophecy. 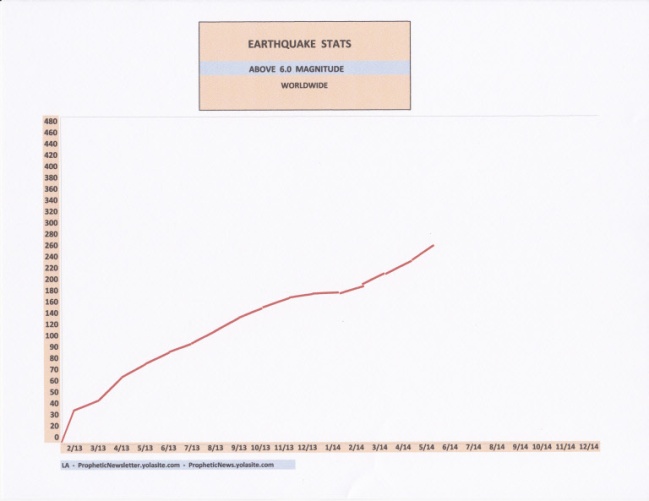 At least 482 major to great (6.0+) earthquakes have been reported on this site during the last 42 months.

Meriam Ibrahim is shown in a wedding photo with her American husband and a photo is included of her 20-month-old son who languishes with her in a Sudanese prison awaiting 100 lashes, then to be hanged, for being a Christian!

BARACK OBAMA: ISLAM HAS A PROUD TRADITION OF TOLERANCE

During a 2009 speech, Barack Obama pronounced, “Islam has a proud tradition of tolerance…”

“President” Barack Obama is obviously not completely coherent and he needs to be impeached. Not only does he need to be impeached, but he should also be prosecuted for treason. Here are some outrageous examples of the truth about Islam:

*Pakistani Family of pregnant woman stoned her to death for marrying the man she loved.

*One wife stoned to death, first wife strangled in Pakistan.

*A nine-month-old boy has been formally charged with attempted murder in Pakistan.

Meriam Ibrahim was sentenced to be whipped 100 lashes, then hanged, for being a Christian in Sudan under Shariah law. Her infant boy is in prison with her and she gave birth to the baby of an American citizen in recent weeks, while in shackles.

The Obama administration has said nothing about the impending torture and death sentence. Eric Holder has requested a “blood test” to prove the toddler is the son of an American citizen. Neither Barack Obama or Eric Holder has said a word against the atrocities committed against this woman for her Christian faith, or in behalf of many other Christians tortured and murdered in Muslims countries.

While the UN issued a statement for Meriam’s release, Barack Obama and the United Nations defend Muslims throughout the world and they have an agenda…

The Word of God tells us that a world dictator and false prophet will come to power in the last days,

“He causes all, both small and great, rich and poor, free and bond, to receive a mark on their right hand, or on their foreheads, that no man might buy or sell, save he who had the mark, the name of the beast, or the number of his name. Here is wisdom. Let him who has understanding count the number of the beast, for it is the number of a man, and his number is six hundred, sixty-six” Revelation 13:16-18.

The number 666 is a holy number in Islam.

“I saw thrones and those who sat upon them and judgment was given unto them, and I saw the souls of those who were beheaded for the witness of Jesus and for the Word of God and who had not worshiped the beast, neither his image, neither had received his mark upon their foreheads, or in their hands, and they lived and reigned with Christ a thousand years” Revelation 20:4.

John the Revelator foretold that the souls who did not “worship the beast (antichrist), his image, or receive his mark on their foreheads or hands would be beheaded.”

We are rapidly heading toward the great tribulation spoken of in the Word of God, but many who do not have spiritual eyes to see, do not see it coming.

There is hope and a way of escape, but it is imperative to know God’s Word and be ready to escape the wrath of God which will fall upon a sinful world in the near future.

“Watch therefore and pray always that you may be accounted worthy to escape all these things that shall come to pass and to stand before the Son of man” Luke 21:36.

The great tribulation will make the holocaust pale in comparison, according to the words of Jesus,