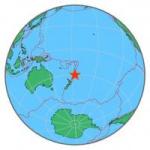 A tsunami warning bulletin was issued by the Pacific Tsunami Warning Center on July 4, 2014 at 1507Z.

Major to great magnitude earthquakes (6.0+) have increased to more than one quake every two days during the last 17 months on average. This is unprecedented and a fulfillment of last days Bible prophecy.

At least 504 major to great (6.0+) earthquakes have been reported on this site during the last 43 months.