Here, Obama can be seen flashing “el diablo,” the sign of satan.

He isn’t the only one who flashes this sign among the Illuminati globalists.

First, notice that Anton LaVey, the high priest of the Church of Satan, San Francisco, CA, used this symbol of satan. LaVey, by the way, was born in Chicago, IL, the home base for many who worship satan. Barack Hussein Obama worked as a community organizer in Chicago, he taught and practiced law in Chicago and became a Senator of IL. Rahm Emanuel, former White House Chief of Staff and “Mr Gutter-mouth himself, is currently Chicago’s Mayor. There is more than one reason why Chicago has one of the highest crime rates in the nation:

Obama’s predecessor, George W (and Mrs) Bush, who is also a member of the Bohemian Club and the Skull and Bones secret society, flashed the sign of satan:

Apparently Mrs. Bush is not estranged to her husband’s allegiance. 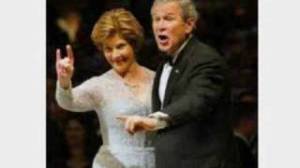 “There shall be great tribulation such as was not since the beginning of the world to this time, no, nor ever shall be” Matthew 24:21.

The Word of God tells us that the wrath of God will be poured out on those who worship devils during the great tribulation to come:

“The rest of the men, who were not killed by these plagues, yet repented not of the works of their hands, that they should not worship devils and idols of gold, silver, brass, stone and of wood, which neither can see, nor hear, nor walk. Neither repented they of their murders, nor of their sorceries, nor of their fornication, nor of their thefts” Revelation 9:20-21.

“And the beast (antichrist) was taken, and with him the false prophet who wrought miracles before him, with which he deceived those who had received the mark of the beast and those who worshiped his image. These both were cast alive into a lake of fire burning with brimstone” Revelation 19:20.

We are heading rapidly toward that time, according to Bible prophecy. The fulfillment of many prophesies has been explained throughout this News page, as well as the Newsletter page of this website since 2010.