At the PSUV Socialist party Congress, Maria Estrella Uribe blasphemed God, as she recited the “Lord’s Prayer,” replacing “Our Father,” with “Chavez!”

“Our Chavez who art in heaven, the earth, the sea and we delegates, hallowed be your name. May your legacy come to us so we can spread it to the people here and elsewhere. Give us your light to guide us every day. Lead us not into temptation of capitalism, deliver us from the evil of the oligarchy, like the crime of contraband, because ours is the homeland, the peace and life forever and ever. Amen. Viva Chavez!”

Uribe recited this blasphemous prayer in front of an enlarged image of Chavez and before the Venezuelan Socialist Congress, for which Congress gave applause!

It disgusted me, as I copied this blasphemy to this report.

Some people have a difficult time believing Bible prophecy, inferring it is impossible, fiction, but this is Bible prophecy being fulfilled, right here!

“Because when they knew God, they glorified Him not as God, neither were thankful, but became vain in their imaginations, and their foolish hearts were darkened. Professing themselves to be wise, they became fools, and changed the glory of the incorruptible God into an image made like corruptible man, and to birds, and fourfooted beasts and creeping things…who changed the truth of God into a lie and worshiped and served the creature more than the Creator, who is blessed forever. Amen” Romans 1:21-23, 25.

We have seen North Koreans literally worship their presidents for decades; the people of India worship idols, rats and other animals all over the country; and people all over the world have worshiped the graven images of Buddha; and now we see the people of Venezuela literally praying to an image of their dead president! They have no fear of God, replacing the holy name of our Father, for the name of a dead man!

The Word of God tells us concerning the antichrist and false prophet to come,

“He causes all, both small and great, rich and poor, free and bond, to receive a mark in their right hand, or in their foreheads, that no man might buy or sell, except he who has the mark, the name of the beast (antichrist), or the number of his name. Here is wisdom. Let him who has understanding count the number of the beast, for it is the number of a man, and his number is six hundred, sixty-six” Revelation 13:16-18.

When the antichrist comes to power and demands worship (2 Thessalonians 2:4), or face beheading, the people of the world will have already been acclimated to worshiping mankind, and most will offer no resistance.

“The third angel followed them, saying with a loud voice, If any man worships the beast and his image, and receives his mark in his forehead, or in his hand, the same shall drink of the wine of the wrath of God, which is poured out without mixture into the cup of his indignation, and he shall be tormented with fire and brimstone in the presence of the holy angels and in the presence of the Lamb (Son of God); and the smoke of their torment ascends up forever and ever and they have no rest day nor night, who worship the beast and his image and whoever receives the mark of his name” Revelation 14:9-11.

These things will all take place in the last days, as sure as hundreds of other prophecies in the Bible have already been fulfilled.

Major to great magnitude earthquakes (6.0+) have increased to more than one quake every two days during the last 19 months on average. This is unprecedented and a fulfillment of last days Bible prophecy. 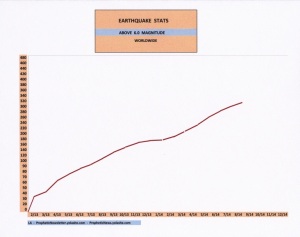 At least 532 major to great (6.0+) earthquakes have been reported on this site during the last 45 months.