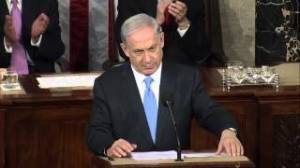 Prime Minister Benjamin Netanyahu, loved by the US

Jerusalem – Conservative Prime Minister Netanyahu promised, during his last day of campaigning, that he would not allow the establishment of a Palestinian state, and that building in East Jerusalem would continue.

PM Netanyahu has been an unyielding supporter of Israel, a true Zionist and he stands firmly against the deceitful “Palestinian push” against his nation.

As this report is uploaded Monday evening in the US, votes will be cast throughout Israel on Tuesday.

It seems Israeli opinion polls are about as reliable as some of the propagandized polls in the US. Surely the majority of Israeli citizens are not inclined to vote for the anti-Zionist Herzog and his “Zionist” Union. That name, Zionist Union, is about as “Zionist” as Obama is a “constitutionalist!”

Herzog, for instance, is opposed to building in East Jerusalem, and he is for a two-state solution, dividing Israel with the Palestinians.

Anyone who believes the Palestinians can have “peaceful” negotiations with Israelis is out of tune with reality.

The Palestinians hate Jews and they want to annihilate them at any cost – period. Herzog is not really a Jew, and certainly not a Zionist, if he believes Israel can be divided, bringing down the wrath of Almighty God, which is what he intends to do if he is elected Prime Minister of Israel.

“Behold, in those days and in that time (time of the end), when I (God) shall bring again the captivity of Judah and Jerusalem (which occurred in 1948 for Israel, and 1967 for Jerusalem), I will also gather all nations and will bring them into the valley of Jehoshaphat, and will plead with them there for My people and for My heritage Israel, whom they have scattered among the nations and parted My land…Yes, and what have you to do with Me, oh Tyre and Zidon, and all the coasts of Palestine (Palestinians – the same ancient enemies of Israel)? Will you render Me a recompense? And if you recompense Me, swiftly and speedily will I return your recompense upon your own head” Joel 3:1-2, 4.

If the Israelis still have a majority of citizens who can think rationally, and REMEMBER THEIR OWN HISTORY, they will reelect Prime Minister Benjamin Netanyahu, a true Jew and a real Zionist; but if they have forgotten their own history and the deceitfulness of Palestine – and how the Word of God says that the Lord Himself will recompense the Palestinians for their evil – then they will elect Herzog, this anti-Zionist Jew, who is not really a Jew!

May God have mercy on Israel.

The Word of God tells us that in the latter days the Lord will gather all nations who are against Israel (Joel 3, Zechariah 14), into the valley of Jehoshaphat for parting His land. God gave Israel to the Jews, only to the Jews (Genesis 15:18-21, Genesis 17:7-8, Numbers 34), and there will soon come a day when the Lord Himself will defend Israel after the land has been parted to the enemies of Israel, according to Bible prophecy.

The outcome of this Israeli general election may reveal to us just how soon this word of prophecy will be fulfilled.