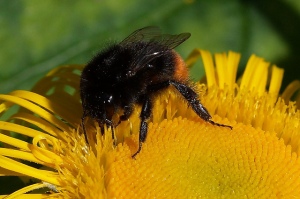 40 PERCENT OF BEE HIVES DIED IN THE PAST YEAR

Overall, there has been a 40 percent die-off in the last year.

In that pollination produces about one-third of the food supply, the world is in a big heap of trouble.

At the same time, the Progressive-propagandized media report that (Progressive-muppet) entomologists said, “It’s not quite as dire as it sounds.”

This news reminds me of an article I read in the Orange County Register about 30 years ago. A serial killer had kidnapped three children in succession and by the time the third child had been abducted and killed, law enforcement finally notified the public to beware. Citizens were outraged about the fact that the information had been withheld, until the third child had been murdered. Law enforcement felt vindicated by stating they “did not want to cause a panic.”

THEY DID NOT WANT TO CAUSE PANIC?! These demonically inspired liberals didn’t notify the public, so they were unable to protect their children. They withheld information that would have saved precious lives, but you can believe they were watching their own children like hawks.

These have no heart, they are devoid of conscience, reprobate, and the likes of them are still running about the world today, except they are much more hardened, evil and even rabid.

Progressives (Socialists, Marxists, Communists, Fascists) will have you believe all is at peace and all is well…until the last apple is gone…until your child is dead!

“When they shall say, Peace and safety, then sudden destruction will come upon them, as travail upon a woman with child, and they shall not escape” 1 Thessalonians 5:3.

The Nazis are a good example. They rounded up the Jews and took their weapons peaceably, explaining to them that they were going to move them to a “better place,” as they helped them into cattle cars. A good number of them and their children died horrific deaths on their long journey to concentration camps, crammed shoulder to shoulder in cattle cars without food, water, or facilities of any kind. Many of those who didn’t die on the way, were killed in gas chambers when they arrived. Those unfortunate enough to have survived were starved, agonizingly separated from their children and tortured. The medical experiments imposed upon them, even the children, are enough to curl your straight hair.

Even so, the great tribulation foretold in God’s Word for the last days (His wrath reserved for the wicked) will be worse than the Holocaust:

The good news is that the wrath of God is reserved only for the wicked, not for the righteous:

“Wait for His Son from heaven, whom He raised from the dead, even Jesus, who delivered us from the wrath to come” 1 Thessalonians 1:10.

I have a word of advice for those who have not received Jesus as their Lord and Savior: Repent – while there is still time!