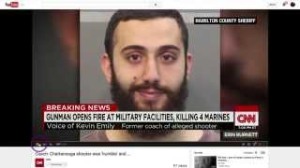 A US official said the FBI was not aware of him being any kind of threat and officials said they would try to find out if Abdulazeez was motivated by the Islamic State (IS).

Hello…,US officials, Abdulazeez doesn’t have to be motivated by IS; the QUR’AN tells all Muslims to kill non-Muslims.

Pick up a Qur’an and read it, if you would like to gain some efficiency at doing your job, as it pertains to Muslim terrorists.

Here, let me help you a little bit:

“Seize them and kill them (unbelievers in Islam) wherever you find them” Surah 4:89.

Bear in mind, this is a Muslim’s “holy book.” They would surely want to kill you if you even slander this book!

“When you encounter the infidels (unbelievers in Islam), strike off their heads” Surah 47:4 (emphasis added).

“If you encounter those who disbelieve (in Islam), strike their necks…behead them” Surah 7:4

“Give firmness to the believers (Muslims): I will instill terror into the hearts of the unbelievers (non-Muslims); you smite them above their necks and smite all their fingertips off them” Surah 8:12.

“Strike terror into the hearts of the enemies of God and your enemies and others” Surah 8:60.

“Believers, make war on the infidels who dwell around you. Deal firmly with them.” Surah 9:123.

What is it about these instructions contained within the Muslim “holy book,” the Qur’an, that the FBI, CIA, NSA and the Department of Homeland Security can’t understand? They are written in English – the Qur’an is printed in the English language.

Okay, let us spell this out just a little more carefully for the simple-minded here:

Jihad, “holy war,” is what all Muslims are supposed to declare against non-Muslims, according to their “holy book,” the Qur’an. Most Muslims in America do not participate in jihad – at least YET – because they are outnumbered here. When Obama (or Hillary Clinton after him) brings more Muslims into America, and they continue having as many children as they possibly can, then more Muslims will be able to participate in the jihad aspect of their faith.

Is that understandable now?

The antichrist, Muslim Mahdi (messiah), will rule the world and commerce during the seven-year tribulation, according to Bible prophecy:

“He causes all, both small and great, rich and poor, free and bond, to receive a mark in their right hand, or in their foreheads, that no man might buy or sell, except he who has the mark, the name of the beast (antichrist), or the number of his name. Here is wisdom. Let all who have understanding county the number of the beast, for it is the number of a man, and his number is six hundred, sixty-six” Revelation 13:16-18.

“I saw thrones and those who sat upon them and judgment was given unto them; and I saw the souls of those who were BEHEADED for the witness of Jesus (happening right now in the Middle East) and for the Word of God, who had not worshiped the beast, neither his image, neither had received his mark upon their foreheads, or in their hands, and they lived and reigned with Christ a thousand years” Revelation 20:4 (emphasis added).

The Pacific Tsunami Warning Center issued a warning statement on July 16, 2015 at 1521 UTC.

Major to great magnitude earthquakes (6.0+) have increased to more than one quake every two days during the last 29 months on average. This is unprecedented and a fulfillment of last days Bible prophecy.

Watch for earthquakes to occur in various places like never before!

This year, 2015, the “Star of Bethlehem” appeared on June 30th, for the first time in about 2,000 years, since the birth of Jesus our Savior; and it is the Hebrew Shemitah year (occurring only once every seven years), as well as the Jubilee year (occurring only once every 49 years), as we also see the extremely rare occurrence of four “blood moons” (lunar eclipses, Joel 2:31, Acts 20:2) occurring simultaneously on four of Israel’s feast days in 2014-15, with a solar eclipse…