Clinton’s notable pitch this year for her pro-abortion (unborn baby murdering) audience was, “Far too many women are still denied critical access to reproductive healthcare and safe childbirth (what she means here is the murder of unborn babies and the murder of late term unborn babies)…and deep seated cultural codes, RELIGIOUS BELIEFS and structural biases HAVE TO BE CHANGED” (emphasis added).

If the proabortion (unborn baby murdering), eugenicist, depopulation, globalist Bilderbergs don’t put Hillary Clinton in office after Obama, it may be that George Soros’s voting machines have been seriously hacked and their media muppets all went on vacation! 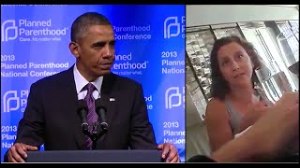 One of the reasons the Bilderbergers placed Barack Hussein Obama in office is because he is a Socialist-Liberal-Progressive, member of the Socialist New Party and staunch supporter of abortion (murder of unborn babies).

The US House of Representatives passed the federal Pain-Capable Unborn Child Protection Act, which came on the second anniversary of Kermit Gosnell’s murder conviction, but the Act still has to pass the Senate. After that, Obama has already threatened to veto the Act, even if it passes the Senate.

The Act bans abortion after 20 weeks, at which point medical science has proven unborn babies can feel the pain and horror of being ripped apart in their mother’s womb!

This same bill didn’t pass the Senate in 2013. Why? Let’s cut to the chase – the Bilderbergers (eugenicists and globalists), quite frankly, don’t care if unborn babies can feel the pain and horror of being torn apart, limb from limb, or crushed with forceps in their mothers’ wombs (which is why they attend the ‘Cremation of Care’ every year); they want as many babies dead as possible. According to their tenets (Georgia Guidestones), the world is already about 93 percent overpopulated, which means they want over six billion people dead!

Obama calls this Act to protect unborns “disgraceful.” He believes it is totally disgraceful that anyone should want to STOP the pain and horror of how these late term unborn babies are slaughtered!

The Word of God has something to say about these liberals:

“The vile person shall no more be called liberal (they call themselves Progressives now), nor the churl said to be bountiful, for the vile person will speak villainy and his heart will work iniquity, to practice hypocrisy, and to utter error against the Lord, to make empty the soul of the hungry, and he will cause the drink of the thirsty to fail. The instruments of the churl are evil; he devises wicked devices to destroy the poor with lying words, even when needy speak right; but the liberal devises liberal things and by liberal things shall he stand” Isaiah 32:5-8.

*While people are homeless and jobless in America, Barack Hussein Obama has immigrated hundreds of thousands of people, especially Muslims from the Middle East, many of whom are likely to be terrorists, into the US. Obama also has an open border policy, which facilitates Islamic State (IS-ISIS) terrorists who are already in Mexico.

Is this not indicative of the Socialist-Liberal-Progressive movement Isaiah prophesied about?