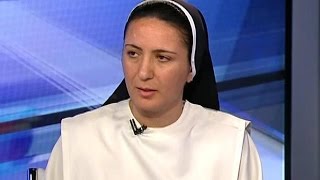 In early May 2015, Obama blocked Sister Diana Momeka from entering the United States, the only Christian in a group delegated to describe their situation in Iraq.

Sister Momeka is known for her advocacy of religious minorities in the Middle East and was prepared to fully describe the horror and Christian persecution perpetrated by the Islamic State (IS) in Iraq, but she was the only one in the delegation, among Yazidi and Turkmen Shia religious groups, who was blocked from their trip to Washington.

Why do you suppose Sister Momeka was initially blocked from coming into the US?

She obviously didn’t fit in with the commandeered testimonials allowed by Obama’s propagandized media.

Sister Momeka was also not among the hundreds of thousands of Muslims converging into the US, whose immigrations have been specifically orchestrated by Obama.

In fact, the Obama administration has worked very hard at keeping persecuted Middle Eastern Christians seeking asylum out of the US!

Nevertheless, as Matthew Balan pointed out in his article for NewsBusters, the Obama administration has a “special envoy” for lesbians, gays, bisexuals and transgenders (LGBT).

In other words, if you are a Christian under threat of being sawn asunder, crucified, beheaded, sliced to pieces, burned alive, drowned or buried alive, Obama will NOT give you asylum in the United States; but if you are a homosexual (which the Word of God says is an abomination in the sight of God – Leviticus 18:22), you will get a very special pass to get in! Hay, he might even light up the White House for you, as he did when the Supreme Court passed gay marriage in all 50 states!

Only through pressure and public outcry did the State Department reverse their decision, allowing Sister Momeka to enter the US temporarily to speak against the Christian genocide in Iraq.

The Prophet Daniel wrote about the antichrist of the last days,

“He shall speak great words against the Most High and shall wear out the saints of the Most High and think to change times and laws; and they shall be given into his hand until a time (one year), and times (two years) and the dividing of time (half a year = 3 ½ years)” Daniel 7:25.

I do not say that Barack Obama is the last antichrist to come during the seven-year tribulation, but he is an antichrist just the same.

“Little children, it is the last time, and as you have heard that antichrist shall come, even now are there many antichrists…” 1 John 2:18.

Many antichrists have come and gone throughout history: Nero, Antiochus Epiphanes, Leopold, Hitler, Stalin, Mao Zedong and the like. Barack Hussein Obama is stealthy, but he is one of them. Whether he will be the last and final antichrist, we do not know, but they all kill and/or oppress God’s people, especially Jews and Christians.

Barack Hussein Obama himself will likely be known as the greatest taqiyya in modern history.