A middle school in Walton County, Georgia, taught the Five Pillars of Islam, the Qur’an is a “holy book,” and the “shahada,” conversion prayer of Islam, to students; then they were quizzed on what they had learned.

Ryan Breece started a Facebook page to get schools to warn parents in advance of teaching Islam, giving them the opportunity to opt their children out of those classes.

Breece said he took his daughter out of the Islam class, but her grade suffered.

Listen, folks, you really need to get your children out of public schools altogether.

If public schools aren’t teaching Islam today, chances are they are teaching elementary through high school students how to commit sodomy! That’s right, homosexual sex (step-by-step) in the name of “sex education!”

“You shall not lie with mankind, as with womankind; it is abomination” Leviticus 18:22.

“There were false prophets among the people, even as there shall be false teachers among you, who privily shall bring in damnable heresies, even denying the Lord that bought them and bring upon themselves swift destruction” 2 Peter 2:1.

Public schools are bringing in the teachings of Islam under the radar and parents aren’t even being told in advance. America outlawed Christian prayers in public schools since 1962; the Holy Bible was kicked out in 1963! It is beyond outrageous that US public schools are now teaching the Qur’an, the Five Pillars of Islam, the Islamic prayer of conversion and other Islamic tenets in US schools!

Who might we look to blame for this recent spiritual attack against the children of America? You need look no further than the antichrist, or his prototype, sitting in the White House – the defender of Islam – the one who has waged stealth jihad against Americans since he stepped foot in the Oval Office!

No, I have no regard for “political correctness.” You will receive nothing but bare bones truth at this site.

If you believe you are unable to homeschool your children because you are a single parent family, or have a low income, there are some very helpful suggestions and valuable information included on the Home Education page; please visit the page and trust God for the ability to get your children out of the hands of the wicked.

“…His divine power has given unto us all things that pertain unto life and godliness, through the knowledge of Him who has called us to glory and virtue” 2 Peter 1:3.

God has promised to give us everything we need to live and to live godly, we only need to pray, trust – in obedience (1 John 3:22) and believe, then wait for the answer to come; it will! 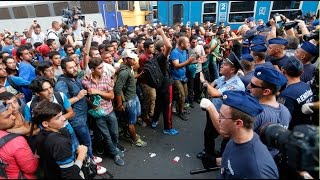 The nations are in turmoil because of the Middle Eastern “refugee” migration. In areas where immigrants are converging, we see chaos, and people are complaining about the problems that ensue.

Aida Bolivar, a Ukrainian journalist who speaks fluent Arabic, said she was traveling by train from Budapest to Vienna, as the train was suddenly besieged by Muslim immigrants. She said they were men between the ages of about 18 to 45, and after they boarded her train, they began talking to one another about whether or not they should rob and rape the other passengers.

Bolivar said that while she waited for another train at the Keleti Railway Station in Budapest, Arab migrants openly and without shame defecated right where they stood in the station.

Bolivar warned that many are not the peace-loving job hunters the new host nations desire.

Groups of fit men 18 to 45 leaving the Middle East, without their families, to flee terrorism? I think not. This is a deliberate plot to expand the Islamic Caliphate and strike terror against those who refuse.

When the nation of Israel sinned against God and failed to adhere to His will and His commandments, these were the proclamations by the prophet Ezekiel to Israel (and the same applies to America today for her sins):

“And I will bring you out of the midst thereof and deliver you into the hands of strangers and will execute judgments among you” Ezekiel 11:9.

“Strangers, the terrible of the nations (as in Muslim terrorists?), have cut him off and have left him (the nation that sinned); upon the mountains and in the valleys his branches are fallen and his boughs are broken by all the rivers of the land, and all the people of the earth are gone down from his shadow and have left him” Ezekiel 31:12.

“I will give it into the hands of the strangers for a prey and to the wicked of the earth for a spoil and they shall pollute it” Ezekiel 7:21.

Can we not see the strong parallel here? Does America really believe she can ruthlessly and hideously kill her unborn, kick God out of her schools and bring in the evolution charts and abominable sexual perversions in the name of “sex education” into the schools and get away with it?

The globalists have a plan, which is a bit more advanced in Britain. Muslims were allowed to immigrate there and consequently hundreds of churches have closed and mosques have opened in their places. There are more than 80 sharia courts in Britain, and rising…

Citizens of the UK, Germany and America need to remember that when the Muslims are no longer the minority, the third stage of jihad will be executed, as outlined in the Qur’an:

“Seize them and kill them (non-Muslims) wherever you find them” Surah 4:89.

“When you encounter the infidels, strike off their heads (which is why you see heads flying all over the Middle East [except Israel])” Surah 47:4.

“If you encounter those who disbelieve, strike their necks…behead them” Surah 7:4.

I could continue on and on…

Why do heads of nations allow Muslims to come in and take over, such as they did in the UK, and are starting to do in America?

The globalists-Luciferians, believe the world is about 97 percent overpopulated. Muslims have the “best” history for killing hundreds of millions of people, once they gain control (to the tune of about 270 million killed by Muslims in 1,400 years, which figures do not include those they kill among their own people for capital and civil crimes).

Next on the agenda is allowing Muslim terrorists to gain control over populations and annihilate masses without restraint (as they do throughout the Middle East and parts of Africa – even their children behead people).

Albeit, here is what the Word of God has to say about your plans:

“They shall cast their silver in the streets and their gold shall be removed (as it was in 1933 by Executive Order 6102); their silver and their gold shall not be able to deliver them in the day of the wrath of the Lord; they shall not satisfy their souls, neither fill their bowels (there will be famine), because it (silver and gold) is the stumblingblock of their iniquity” Ezekiel 7:19.

You can hoard gold and silver all day long, but in the end, it will do you no good. The antichrist (Mahdi – Muslim messiah) will subjugate and kill you:

“He causes all, both small and great, rich and poor, free and bond, to receive a mark in their right hand, or in their foreheads, that no man might buy or sell, except he who has the mark, name of the beast (antichrist), or the number of his name. Here is wisdom. Let him who has understanding count the number of the beast, for it is the number of a man, and his number is six hundred, sixty-six” Revelation 13:16-18.

…and this is what happens to those who receive the “mark of the beast” at the end of days:

“I saw thrones and they sat upon them and judgment was given unto them; and I saw the souls of those who were beheaded for the witness of Jesus and for the Word of God, which had not worshiped the beast, neither his image, neither had received his mark upon their foreheads, or in their hands, and they lived and reigned with Christ a thousand years” Revelation 20:4.