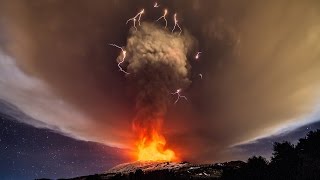 Italia’s Mount Etna erupted Thursday, December 3, 2015, for the first time since 2013. The Voragine crater erupted a massive plume, with fire and lightning.

Mount Etna is the tallest volcano in Europe, reaching a height of 10,922 ft, and it spans about 459 square miles. The volcano has five craters.

“I will show wonders in heaven above, and signs in the earth beneath, blood, fire and vapor of smoke” Acts 2:19.

John the Revelator also explained to us what is coming in the not too distant future:

“There were voices, thunders and lightnings, and there was a great earthquake, such as was not since men were upon the earth, so mighty an earthquake, and so great…and every island fled away and the mountains were not found” Revelation 16:18,20.

Mount Etna is located on the Island of Sicilia (Sicily, Italy). In the last days, volcanic eruptions will continue to increase and one day – the big one will occur, with a massive earthquake, such as the world has never seen – and “every island will flee and the mountains will not be found.”

It is coming, folks, and you can “take that to the bank.”