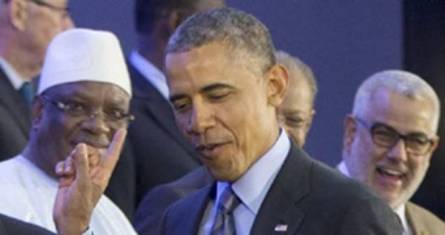 For the umpteenth time, the Fraud in the White House has communicated his allegiance to his Muslim Brotherhood/terrorist cohorts at the US-African Leaders Conference in Washington, DC, in August 2014, by way of flashing the “shahada” (the Muslim profession of faith, “There is no god but Allah, and Muhammad is his messenger).

The above photo is a good depiction of Obama’s real two-bit thug self, instead of his usual coverup.

America has certainly hit rock bottom, from the sodomy instructions to fifth-graders posed as “sex education,” to the chopping up and burning of her unborn babies (some born alive). How much worse can it get?

Barack Hussein Obama, Muslim Brotherhood ally incognito, who has ousted our honorable military generals and other top brass, replacing them with his Muslim and Muslim sympathizing cohorts, those who refuse to disarm Americans and those who refuse to ignore the US Constitution; releasing Muslim terrorists from Guantanamo for the likes of Bowe Bergdahl, a traitor; to handing over billions of dollars worth of arms, missiles, Humvees and the like to Islamic State terrorists; to aiding and abetting Iran’s Muslim terrorists with a nuclear deal…(the list is extremely long), has trampled America underfoot, but he seems to be exactly what America deserves, unless her citizens repent and beg God for mercy!

Obama’s comrade, crooked Hillary, may be up next to complete the demolition.

There is only one way to destroy the stealthy takeover of America, and that is to call upon the name of the Lord.

God agreed to spare the City of Sodom, if there were 10 righteous found in the city (Genesis 18). The angels of the Lord, however, were unable to find even 10 righteous in the entire city, so God destroyed Sodom.

God has no bias; what He does for one, He will do for another – if they meet the conditions.

God will spare America if there are at least 10 righteous in most US cities, because I have asked Him to and I have called upon other servants of God to pray likewise.

“If My people, which are called by My name, shall humble themselves and pray and seek My face, and turn from their wicked ways, then will I hear from heaven and will forgive their sin and will heal their land” 2 Chronicles 7:14.

Will you pray for America? God can do anything and He can save this country – He is the only One who can.

“Blessed is the nation whose God is the Lord, and the people whom He has chosen for His inheritance” Psalm 33:12.