Major (6.0+) to super (8.0+) magnitude earthquakes have increased to more than one every two days on average during the last 42 months. This is unprecedented and a fulfillment of last days Bible prophecy. 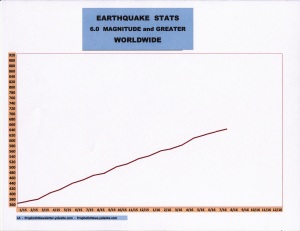 Are Hillary Clinton supporters less evil than Hillary herself? Apparently not. They waited for a Donald Trump fundraiser to conclude on Friday, and then they pushed, beat, spat on and threw garbage at the attendees as they exited the Minneapolis Convention Center.

Protesters also burned an American flag outside the convention center as Trump supporters were trying to exit the building.

Anti-Trump rioters also burned American flags at numerous other Trump rallies, in Burlingame and San Jose, and they stomped on the American flag in St Louis.

This reminds me of the hoodlum Obama supporter, Weather Underground domestic terrorist Bill Ayers, as he stood on the American flag for a photo.

This violent behavior demonstrates the true characters of many of the people who are supporting Hillary Clinton. Their behavior is also characteristic of their appointed leader.

The fact that many of them desecrate the US flag demonstrates that they are also anti-Americans, as is Hillary.

Throughout the presidential campaign, do we ever hear of Trump supporters lying in wait, chasing down, beating up, spitting on and throwing garbage at Clinton supporters? Absolutely not!

Hillary is a criminal. Those who back her are multitrillionaire criminals and gang-style thugs. The people who rally for Hillary are the much the same, without the money, and their character traits are indicative of the type of people they are. Time and time again, we have seen Hillary supporters chase down and beat Trump supporters, throw garbage on them, spit on them and steal and damage their property.

If you are a lying, cheating, thieving, unborn baby killing, violent gangster, then you need to rally for Hillary Clinton; she is your kind of person.

If you would like to see our United States Constitution and Bill of Rights upheld by the next President of the United States, then you need to vote for Donald Trump, not to insinuate that our presidential votes count in America, but God can do anything, friends. We just need to do the right thing, trust God and pray.

“Why do the people rage and imagine a vain thing? The kings of the earth set themselves and the rulers take counsel together against the Lord and against His anointed, saying, Let us break their bands asunder and cast their cords from us (these are lawless Liberal…Communists who do not want to be restrained from perpetrating their evil). He who sits in the heavens shall laugh; the Lord shall have them in derision” Psalms 2:1-4.

The Bilderbergers have dictated who sits in the White House, but God has the last say!

Obama and Hillary, and those like them, are in “derision,” delusional. They believe they are getting away with their evil devices to plunder this nation, but God will have His way in the end, whether it be now, or on Judgment Day.

If God allows Hillary to take office, we will know there were not enough righteous saints in this nation to save it, and God will have turned His back to it.

I am praying that God will find at least 10 righteous in most US cities (as Abraham prayed before Sodom was destroyed [Genesis 18-19]) and that He will spare America for our sake. Will you pray with me?