OBAMA SUSPENDS COMMUNICATION WITH PUTIN OVER AIR STRIKES IN SYRIA

Barack Hussein Obama is terribly unhappy with Russian President Vladimir Putin over the fact that Putin is literally blasting to hell Obama-funded Syrian “rebels” (actually brutal Muslim terrorists committing atrocities against humanity), which is what the US should be doing, but Obama is actually aiding them!

If you take a look at this video (warning: graphic), and this video (warning: graphic), you will understand why there are essentially no victims in Syria if we take them out, when you consider what civilians face. I will give you an example. One girl sent a message via internet that she had been raped so many times, she could no longer urinate. She pleaded for someone to bomb the nation, because she would rather be dead! Do you get my point?

What is Obama doing? NOTHING! He is a contributor to the torture and slaughter of mostly Christians! Bashar al-Assad was too much at peace with Syria’s Christians and Israel for Obama and his Luciferian backers.

This may still be hard for people to believe and digest, but I have been publishing these facts for years, as have other conservative sites (which the Democrat-Socialist…Communists are feverishly trying to censor – and cut – from the internet). With ICANN’s internet takeover (the Obama giveaway) that just may happen in the very near future.

If Hillary is placed the White House, she will immediately start working on taking guns and shutting the mouths of truthers (those who speak the truth) and pick up the war in the Middle East, where Obama left off.

Who really cares about birthers, when we actually need truthers, while there is still some time left to tell the truth!

As people are being burned alive, buried alive, drowned in large cages, crucified, beheaded (even the children) and sliced up to be sold in butcher shops, because the nation is also suffering famine, just who are the “innocent victims” we shouldn’t be killing? If there are some innocent victims, aren’t they much better off getting bombed, hopefully to die instantly, than being tortured like this?

Here, allow me to introduce you to a real American cure-all; this is what they really need in Syria: 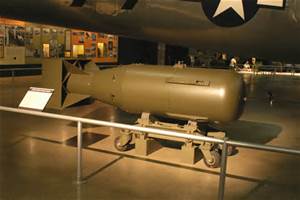 His name is “Little Boy”

Japan didn’t give us any more Pearl Harbor surprises, did they?

The problem with a lot of American Democrats is that ISIS hasn’t arrived to cut off their heads – YET!

Russian news source Moskovsky Komsomolets warned of World War III, if the US persists in trying to take down Bashar al-Assad.

Is Putin kidding? The Sun reported that Russia just held a massive nuclear war exercise, as tensions rise with the US.

Is Obama concerned? Obama hates Americans and our Constitution. He is only here to destroy and conquer. He has access to a nuclear proof underground bunker. He would likely enjoy nothing more than to come up and find the US around him annihilated. In fact, the thought of it just may cause him to provoke Putin!

People who aren’t prepared – need to get prepared to hunker down for a little while. A critical must is a two-week supply of water for your entire family. You can’t live more than a few days without water, folks. It’s an excruciating death, so why risk it?

Jesus told us what to expect preceding His return,

The time is at hand, friends. Are you ready?