Smaller earthquakes have plagued Italy for weeks, and there have already been nine aftershocks in just over the last hour since this quake.

A major earthquake that hit Central Italy in August killed nearly 300 people. It is too early to know if there are any fatalities this time. Many of the antiquated buildings throughout Italy are not able to withstand such major magnitude quakes.

This earthquake destroyed the Basilica of St Benedict. Bloggers are declaring the area a “disaster” where the quake hit, close to the town of Norcia.

It seems Central Italy isn’t doing well at all lately, nor is the Catholic Church. Perhaps God is fed up with the rampant pedophilia in the church that millions still flock to there in Rome.

“Whoever shall receive one such little child in My name receives Me; but whoever shall offend one of these little ones that believe in Me, it is better for him that a millstone be hanged about his neck and that he be drowned in the depth of the sea” Matthew 18:5-6.

Major to super magnitude earthquakes have increased to more than one every two days on average during the last 44 months. This is unprecedented and a fulfillment of last days Bible prophecy. 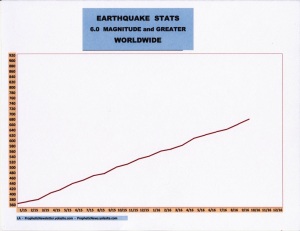 (For a clearer view of stats, see originals)