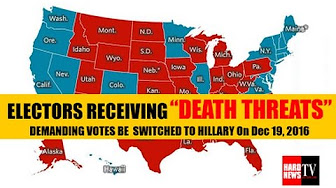 Jill Stein, failed Green Party presidential candidate, has called for a vote recount, as you may already have seen in the headlines. Hillary Clinton has “joined” Stein’s call for the recount, which is only a fake show of support.

Hillary Clinton and her Liberal-Socialist-Marxist-Leninist-Communist cronies, and let’s not forget Muslim terrorists, want the recount. As fast as Stein is raking in the millions, you can believe Hillary was behind it from the start. We should all wonder how much Stein herself is getting for “her” call for a recount.

The call for recount is biased, in that they have only called for a recount in states that Donald Trump won by a small margin, but not the states where Hillary Clinton won by an even smaller margin. Why not take a recount of all the marginal states, if a recount should be made at all?

The reason is that Democratic Liberal…Communist…terrorist Hillary cronies are sending death threats to the electors in the states being asked for a recount. If by duress, meaning DEATH THREATS, they can persuade enough electors to change their votes to Hillary Clinton, then they believe they can claim Hillary won the election.

Since a number of electors have already said they received DEATH THREATS to change their votes to Hillary, a recount must then be declared illegal on account of the very death threats made. The legal definition would be that the electors were possibly acting under “duress” and since such death threats have been made, that fact makes any recount results tainted and thereby nullified.

Michael Banerian of Michigan has received a lot of emails including death threats, if he doesn’t vote for Hillary.

Fox News reported on Friday that Arizona electors have been threatened by Hillary supporters.

The Word of God tells us about these:

“Yes, they are greedy dogs, which can never have enough, and they are shepherds that cannot understand; they all look to their own way, every one for his gain, from his quarter” Isaiah 56:11.

“In you they have taken gifts to shed blood; you have taken usury and increase and you have greedily gained of your neighbor’s by extortion, and have forgotten Me, saith the Lord God” Ezekiel 22:12.

“What is the hope of the hypocrite, though he has gained, when God takes away his soul? Job 27:8.

Crimes and lawlessness will continue and even wax worse, until the Lord returns.