* I found this article, and many other Pizzagate Updates, in Private view status, but I didn’t privatize them. I am republishing them for Public view again on 9/3/20. If this article disappears again, please know that the publisher (elim20) did not remove it!

** The video has been removed by You Tube, as many other incriminating videos have been removed.

David Seaman is an investigative journalist, who was fired from his job with Huffington Post for writing honestly about Hillary Clinton’s health issues.

An armed suspect was arrested after entering Comet Ping Pong in Washington, DC, on Sunday afternoon.

Comet Ping Pong, a pizza shop on Connecticut Avenue, has been at the center of a citizens’ investigation over bizarre photographs and statements found within the private member’s site on the Comet Ping Pong website. The photos and comments alluded to pedophilia, child abuse and even the torture and murder of children.

The instagrams located on the Comet Ping Pong site were linked to John Podesta’s emails released by Wikileaks earlier, which citizens had also been investigating due to the bizarre contents of the emails referring to pizzas, hot dogs, cheese, etc, which are code words for child trafficking (pizza = little girl; hot dog = little boy; cheese = infant girl; etc.). The contents of the emails, although the food code words were used, could not have been referring to actual pizzas, hot dogs, cheese, etc, due to the surrounding content of the emails. They, in fact, obviously alluded to children instead.

The New York Police Department discovered the Podesta emails during their investigation into the contents of Anthony Weiner’s computer. The NYPD investigators were so alarmed, they turned the emails over to the FBI. Even though the NYPD and FBI inside sources state the emails blatantly point to a child pedophile ring, including torture and murder, higher ups in the department refused to go forward with an investigation, or a request for prosecution. 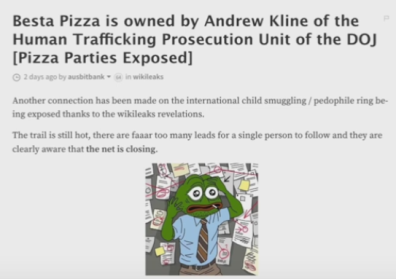 I do not condone anyone taking the law into their own hands to threaten or kill people, or brandish firearms. Many of us do, however, wonder when the FBI will get past their fear of Barack Obama, Hillary Clinton, John Podesta and James Alefontis, and present a case against them; but more importantly, tear up Connecticut Avenue looking for innocent children that may be held and tortured in, or around the string of pizza joints on that street!

Fox News, and other mainstream media outlets, are reporting that PizzaGate is fake news, and that Comet Ping Pong has been victimized!

“Woe unto them that call evil good, and good evil; that put darkness for light, and light for darkness; that put bitter for sweet, and sweet for bitter! Isaiah 5:20.

Citizens, Obviously, if you want to read real news, you are going to have to go to conservative outlets to see and hear the truth. We have entered a dangerous era of media propaganda, which covers up the crimes committed by billionaires, the Illuminati, Luciferians, and left-wing political figures, all the way to the highest offices in the nation.

The DC Police Department has already announced, without running their own investigation into John Podesta’s emails, and obviously without investigating the private members only pages of the Comet Ping Pong website, “All of the claims against the popular Northwest DC pizzeria are false and unfounded.”

With all of the incriminating circumstantial evidence, which can be the strongest evidence in criminal cases, one has to wonder why government officials in DC, and those that work with the Obama administration, are so VERY QUICK to exonerate those in powerful positions. These are obviously not the standards used at all for such criminal investigations among the general population.

The more those surrounding Clinton, Obama, Podesta, Alefontis, Kline, and many more, immediately “cry foul” without any real investigation, that fact alone leads to more incriminating evidence against them.

Anyone with half a brain, who has read the private instagrams on the Comet Ping Pong website, or the John Podesta emails, knows criminal activity involving pedophilia is going with these individuals and a long list of others. If these people are alluding to criminal activity with children, but they say they are doing that for no reason, anyone in their right mind would investigate regardless to find out the truth.

We are witnessing evidence of evil in the worst sense of the word.

“Among My people are found wicked men; they lay in wait, as he that sets snares; they set a trap, they catch men. As a cage is full of birds, so are their houses full of deceit, therefore, they have become great and waxed rich. They have waxed fat, they shine; yes, they overpass the deeds of the wicked; they judge not the cause, the cause of the fatherless, yet they prosper, and the right of the needy do they not judge. Shall I not visit these things, saith the Lord? Shall not My soul be avenged on such a nation as this?” Jeremiah 5:26-29.