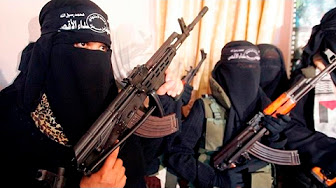 Daily Star reported on Wednesday that ISIS has unleashed a women’s jihadi “biting brigade” armed with a “metal jaws” device to tear women to pieces. The women’s brigade police other women and girls and if they break any of the strict Islamic State laws, they will be torn to pieces.

Al-Khansa is a female jihadi group, who are now armed with large “metal jaws” with sharp iron teeth that are also laced with poison.

A woman spoke anonymously to Russian news Sputnik in Iraq about a 10-year-old girl who walked across the threshold of her home briefly while cleaning, without an escort, which is illegal in Iraq. The Hisbah (morality police) gave the girl’s mother the option to choose which one of them would receive the punishment of “being bitten,” her, or her daughter.

Believing the punishment would be a “bite on the hand,” the mother said her daughter could receive the punishment. The ISIS women, however, produced a huge metal biting device with iron teeth and poison on the teeth. The iron teeth tore the child’s flesh so badly, she bled to death even before the poison could kill her.

This recent story of Islamic State terrorism against a poor innocent child with “iron teeth” reminds me of a prophecy Daniel gave:

“I saw in the night visions and, behold, a fourth beast (referring to a fourth empire, following his description of three previous empires), dreadful and terrible and exceedingly strong, and it had great IRON TEETH; it devoured and broke in pieces and stamped the residue with the feet of it, and it was diverse from all the beasts that were before it, and it had ten horns” Daniel 7:7 (emphasis added).

In Bible prophecy, the ten horns refer to leaders of nations (Revelation 17:12). These ten horns (kings/leaders) will receive power as kings for one hour with the antichrist during the great tribulation of the latter days.

The fourth beast (empire) which Daniel spoke of (Daniel 7:7), with iron teeth that devoured and broke in pieces is, I believe, the Islamic State. I also believe it is a sign of the last days that this women’s brigade use “iron teeth” to tear apart women and little girls who violate ISIS laws. It is a sign that these represent the very beast that is terrible, breaks in pieces and devours, just as Daniel described.

As much as President Donald Trump wants to destroy the antichrist kingdom, having come up out of Syria and Iraq, just as the Word of God tells us it would (Isaiah 10:5; Isaiah 10:24; Isaiah 30:31 – Assyria being modern day Syria and Iraq), the antichrist will survive and devour, until the Lord crushes him on His holy mountains (Isaiah 14:25).

President Donald Trump is fighting right now to place a temporary ban on immigrants coming into the US from seven Middle Eastern Muslim nations that host and support terrorism, but the Liberal-Socialist-Marxist-Leninist-Communists are fighting against it. A federal judge ordered a stay on President Trump’s immigration ban.

President Bashar al-Assad, who is fighting the Islamic State in Syria, issued a statement saying that terrorists are likely entering the US from Syria because of the judge’s stay on President Trump’s immigration ban. The 9th Circuit Court of Appeals upheld the stay on Thursday.

Why would any judge in the US, or masses of Democrats, want to halt President Trump’s immigration ban from Muslim terrorist countries?

Simply put, those who do not serve the Lord are servants of satan by default; they are fulfilling the will of satan and they may not even know why they are doing the things they do.

Oh Lord, if anyone is going to be blown up by Muslim terrorists coming from these terrorist nations, let it not be those, or the families of those, who support President Trump’s ban to protect their families; may it rather be the judges and Democrats who support open borders and insist that Muslim terrorists be allowed into our country to blow us up. Amen.

In other words, those who love the iron teeth of the Assyrian, let him and his cohorts alone be torn up and blown to pieces by the same! May we, who want them out of the United States, be protected.