As we move along the Pizzagate path, we have come to recognize a certain common connection between pizza shops, pizza owners, pedophilia and finally the connection to those in the upper echelons of government.

I have linked a video (above), compiled by SGT Report on YouTube.com, about some of the latest news, including an interview given to John Podesta about Pizzagate. Podesta squirms and stutters the entire interview.

SGT Report has two guests on that are basically citizen investigators into Pizzagate and they, through their own research, have brought out some very interesting facts surrounding the DC pedophile ring.

These citizens aren’t always articulate and it is important to have patience going through some of their videos on You Tube, as they aren’t trained and paid professionals, but the patience pays off. Some of these folks are Christians and most are simply hard-working people like you and me, doing research as they find time; still others are younger adults that are very concerned for the children and they spend their time researching facts surrounding Pizzagate. I am very impressed with some of the information they are able to dig up.

You may want to research “Pizzagate” on YouTube.com and various other social media sources, to check out what others have found.

Some You Tubers have chimed in just to try to debunk Pizzagate, but they have absolutely no grounds to ridicule or deny the mounting evidence, which I am convinced proves the DC pedophile ring exists; and that it not only exists, but is so widespread among powerful people, that lower level law enforcement staff aren’t able to penetrate the barriers at the top, at least without losing their jobs and even their very lives. I am dead serious.

If you are a Christian, please pray for the abducted children daily, that they will be rescued and their abusers and killers will be exposed, arrested and brought to justice quickly. 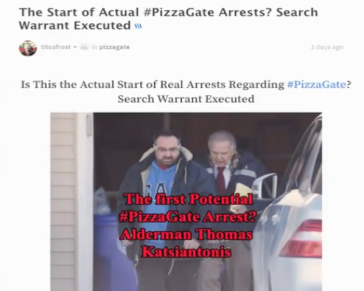 What makes this news even more interesting is Katsiantonis’s relationship to Hillary Clinton and Barack Obama. 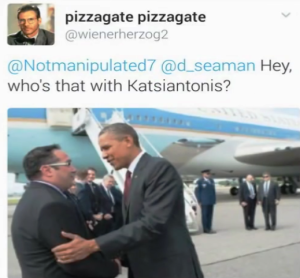 The bad news is that the search warrants have been sealed, and worse yet is that the Associate Attorney General on the case, Jane Young, said it is a financial investigation.

It could be coincidental that this civic leader, Thomas Katsiantonis, described as an “alderman,” has some financial issues, and just so happens to own some pizza shops, but this could also be one of those cover up investigations, similar to the Franklin pedophile coverup, just to satisfy the public, only to end in much lesser charges and a short prison term – the fall guy, so to speak.

Just last year, a pizza shop and karate studio owner, Loren Copp, was arrested for crimes against young girls in St Louis, Missouri. He was keeping underage girls at his pizza shop, Dojo Pizza, and he was charged with sexual abuse. His computer was also found to contain child pornography. Previously, he ran a “Christian” school at the same location!

We have seen several arrests recently and search warrants issued, which they are probably hoping will satisfy us, so Pizzagate will finally go away; but I’ll never be satisfied with any of their investigations, arrests, or convictions, until I see handcuffs on James Alefontis and John and Tony Podesta; then I want to see Bill and Hillary taken down, along with Barack Obama!

Just as the great miracle-working hand of God spared us from witch Hillary, we can also see these pedophiles arrested and brought to judgment, if the saints of God will pray and believe God to bring them down. We need to pray daily and continue praying, until we see the results of our all of prayers.

“For the eyes of the Lord are over the righteous and His ears are open unto their prayers, but the face of the Lord is against them that do evil” 1 Peter 3:12.

There is more to these crimes than the pedophiles themselves; there is a network of crime that runs throughout police departments, sheriffs, governors, senators and which has even reached the White House at times.

“Have no fellowship with the unfruitful works of darkness, but rather reprove them, for it is a shame even to speak of those things which are done of them in secret; but all things that are reproved are made manifest by the light, for whatever does make manifest is light” Ephesians 5:11-13.

We are called to be bearers of light and spread this word for the sake of the children who are suffering. If you live in the DC area, please consider protesting.