* I found this article, and many other Pizzagate Updates, in Private view status, but I didn’t privatize them. I am republishing them for Public view again on 9/2/20. If this article disappears again, please know that the publisher (elim20) did not remove it! 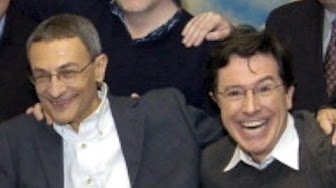 A COLLUSION OF EVIL

On May 3, 2017, I wrote an article about CBS’s Stephen Colbert’s comments he made on his Monday night Late Show against President Donald Trump, which were so lewd, I was not able to publish what Colbert said; it was too pornographic.

Since that time, amidst the outrage, Colbert has only defended his atrociously obscene comments against President Trump, which included Russia’s President Vladimir Putin.

Speaking of Russia and Putin; while the Democrats accused Trump of conspiring with Russia, it was Clinton who received millions in contributions from Uranium One, as Clinton also approved Russia’s purchase of Uranium One while she was Secretary of State, which is nothing less than TREASON!

On Tuesday, after the Colbert Report aired on Monday, Wikileaks released emails between Craig Minassian of the Clinton Group and John Podesta, who was then Hillary’s future campaign manager, to ask him if he, Podesta, had seen one of Colbert’s shows that they had him do. Minassian said,

“I hope you got a chance to see the Colbert Report’s two special episodes ‘I had them do’ about CGIU (Clinton Global Initiative University) that we taped in St Louis this weekend. This is the link to last night’s, with a sketch about commitments and the monologue and WJC (Bill Clinton) interview aired Monday. Hope you enjoy and looking forward to your feedback. Next will be your Colbert appearance!”

So, here is evidence of the collusion between the very evil (Moloch worshiping) Hillary Clinton, John Podesta, pedophile, or for all appearances pedophile wanna-be, and Stephen Colbert.

The relationship between Hillary Clinton, John Podesta and Stephen Colbert paints a broader picture as to why we find Colbert is so dirty low down and lewd. Birds of a feather flock together. They are stinking, vile carnivorous birds at that!

It is no wonder that Stephen Colbert has made fun of and made it a point to mock, and even try to debunk, Pizzagate (DC pedophiles) evidence. In order to literally make fun of Pizzagate evidence, which portrays little children being kidnapped, sexually molested, tortured and killed, one has to be especially EVIL in every sense of the word.

Colbert’s alliance with those who perpetrate such evil, or at least commit acts and make statements as to indicate they commit such evil deeds, helps us understand the reason for his lewd conduct. He is lewd and he may be one of them!

“This know also that in the last days perilous times shall come, for men shall be lovers of their own selves, covetous, boasters, proud, blasphemers, disobedient to parents, unthankful, unholy, without natural affection, trucebreakers, false accusers, incontinent, fierce, dispers of those that are good” 2 Timothy 3:1-3.

Evil aligns with evil, and moreso in the last days.

“Have no fellowship with the unfruitful works of darkness, but rather reprove them; for it is a shame even to speak of those things which are done of them in secret…See then that you walk circumspectly, not as fools, but as wise, redeeming the time, because the days are evil” Ephesians 5:11-12.