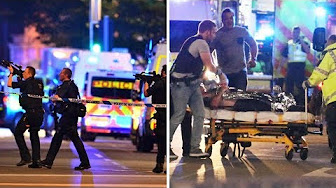 Three Muslim terrorists wielding 12” knives (how would you like to have your throat slit by a 12” knife?) mowed down people on the London Bridge driving approximately 50 miles per hour Saturday evening. The attackers stabbed a police officer on the bridge, then ran into bars and restaurants stabbing people and slitting throats, while yelling, “This is for Allah!” The attack lasted eight minutes, before police finally shot the killers.

As totally preposterous as it is, London’s regular street cops (I call them “ice cream men”) are not allowed to carry guns.

Do you not suppose Muslim terrorists are aware of this? 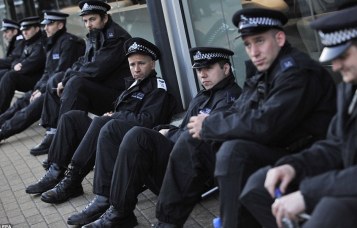 The “Royals” and Members of Parliament (buffoons) are aware of the consequences. They are among the globalist Luciferian elite and they anticipate the murders of police and citizens, because their agenda is depopulation.

I want to take this opportunity to announce that I have a nice little stockpile of weapons and ammo, among which I also have a handy dandy AR-15 – a-n-d – “This (my AR-15) is for JESUS CHRIST!”

I suggest you do the same. If you disagree, please read on…I will back that with scripture.

These Muslim terrorist pieces of dung killed six people and injured at least 30 in London, whose lives have ended, or will never be the same. They have killed 149 so far since the start of Ramadan, May 27th.

Their cohorts, Muslim terrorist pieces of dung, have killed innocent men, women and children throughout the world by the hundreds of thousands just since 2011, not to mention the approximately 270 MILLION they have killed in the last 1,400 years. At least 470,000 have been killed in Syria alone since 2011, not including the many tens of thousands that have been killed throughout other nations, including the UK and the US.

Too many people have died, folks. Is anyone besides me sick and tired of the mayhem, while imbeciles, like Angela Merkel, welcome more Muslim terrorists into their nations?

…which is likely one of the very reasons London is attacked so frequently. When killers say, “This is for Allah,” as they mow down dozens of people and slash throats, how long does it take to decide you have a Muslim terrorist on your hands?!

President Donald Trump wants to stop the madness in the US. The following is his response to these tragic brutal murders:

“We need to be smart, vigilant and tough. We need the courts to give us back our rights. We need the travel ban as an extra level of safety.”

In response to this sewage, written by an Iranian terrorist-loving piece of dung, who should not be in this country, the American people need to boycott CNN and demand that they move their hind ends out of America, perhaps into Syria, so they can understand the magnitude of their stupidity—after they are shot up a few times.

President Trump is 100 percent right and every American citizen with at least half a brain left should back him up.

President Trump is actually too lenient. We should round up every satan-worshipping Muslim and extradite their (backsides) to wherever they came from! The first one to go should be Reza Aslan – back to Iran!

If you disagree, I sincerely hope it won’t be the slaughter of your dearest family member that changes your mind.

Certainly, there are non-jihadists, many of whom celebrate the mayhem in their closets, so we have been told by Muslim converts to Christianity, while they smile to our face, which is exactly what the Qur’an tells Muslims to do, until they gain control of the nation in which they reside. Then, it’s public beheadings on Fridays, amputations for thefts, female genital mutilation of your daughters, stoning and hanging (only of the women – not the men) for adultery, etc…for “Allah!”

“Then He (Jesus) said to them, But now, he who has a purse (supply bag), let him take it, and likewise his scrip (wallet), and he who has no sword, let him sell his garment and buy one” Luke 22:36.

This is only the beginning, folks. They plan to conquer the entire world. If you don’t believe that, you need to read the Qur’an for yourself –a-n-d- you need to read the Bible, because the terror of the antichrist kingdom, “fierce with iron teeth” (Daniel 7) is written therein.

“And then shall that wicked one be revealed, whom the Lord shall consume with the spirit of His mouth and shall destroy with the brightness of His coming” 2 Thessalonians 2:8.

In the meantime, saints, be vigilant.