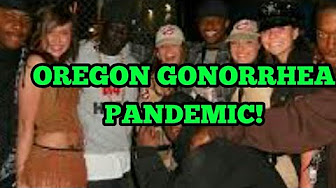 There seems to be a gonorrhea pandemic in Oregon, according to recent headlines, but are we surprised, or shocked?

As I read the story, I couldn’t help think about the fact that it was Oregon that required an employer to refer to their employee as “they,” even though that transgender person was just one person.

It seems the employee decided to become a she/he transvestite, calling herself/himself “transmasculine and genderqueer” and demanded her/his colleagues call her/him “they!”

She/he is a teacher in Oregon (born a woman) and since, obviously, the school refused to call her “they,” she/he sued and the school had to pay her/him $60,000!

How would you like to be required to address someone at the workplace as “they,” especially in front of school children?! (Please visit the Home Education page.)

It sounds bizarre, crazy, not natural, doesn’t it?

It was also Oregon that passed a law that states the government will pay for the transgender surgery of any teen, 15-17 years of age, without their parents consent!

How abominable is that? Your son could go off to school, be sent out for surgery and come home a girl, or vice versa – without your consent! (PLEASE visit the Home Education page!)

These abominable things are being pushed by the US government and they started in Oregon, where people are more impoverished and rurally located.

The reason for the legal push for this transgender lunacy, which goes against the grain of humanity and even our English language, is the Liberal Luciferian Lunatic NWO depopulation agenda to do away with God’s creation, male and female, to reduce the population (get everyone confused into homosexuality and transgenderism so they don’t procreate) and to decimate the family.

These sins are an abomination, according to the Word of God:

“You shall not lie with mankind, as with womankind, it is an abomination” Leviticus 18:22.

God’s Word also informs us that these people, who disregard God’s commandments and His tenets for humanity, will be given over to a depraved, or reprobate, mind:

“Although they knew God, they neither glorified Him as God, nor gave thanks to Him, but their thinking became futile and their foolish hearts were darkened. Although they claimed to be wise (as in school teachers?), they became fools and exchanged the glory of the immortal God for images made to look like a mortal human being, birds, animals and reptiles” Romans 1:21-23 (NIV)

Let’s pause right here a moment. We are made gloriously in God’s own image, but of late, people aren’t satisfied with what God has given us, as demonstrated below; they would rather look like birds, animals and reptiles, just as Paul prophesied to the Romans about 2,000 years ago:

These have literally modified their bodies in perverse ways to make themselves look like animals, from dying the whites of their eyes, to horn implants, to complete body tattoos.

“Therefore, God gave them over in the sinful desires of their hearts to sexual impurity for the degrading of their bodies with one another. They exchanged the truth about God for a lie and worshiped and served created things, rather than the Creator – who is forever praised. Amen. Because of this, God gave them over to shameful lusts. Even their women exchanged natural sexual relations for unnatural ones. In the same way, the men also abandoned natural relations with women and were inflamed with lust for one another. Men committed shameful acts with other men and received in themselves the due penalty for their error (such as gonorrhea perhaps?). Furthermore, just as they did not think it worthwhile to retain the knowledge of God, God gave them over to a depraved mind, so that they do what ought not to be done. They have become filled with every kind of wickedness, evil, greed and depravity. They are full of envy, murder, strife, deceit and malice. They are gossips, slanderers, God-haters, insolent, arrogant and boastful. They invent ways of doing evil; they disobey their parents; they have no understanding, no fidelity, no love, no mercy. Although they know God’s righteous decree that those who do such things deserve death, they not only continue to do these very things, but also approve of those who practice them” Romans 1:24-32 (NIV).

These will have hell to face, unless they repent, if they repent before they are turned over to a reprobate mind, and thereafter cannot repent.