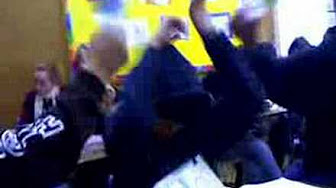 Punjab, India – A Christian teen was beaten to death by all of his Muslim classmates, as the Muslim teacher did nothing.

Students who beat Sharoon Masih to death have no remorse.

The teacher of the high school class said he was reading a newspaper and “did not notice the attack” in the classroom.

Sure he didn’t notice anything.

How is it that a man can read while a boy is literally being beat to death and not notice?

“Sharoon and I cried every night, as he described the daily torture he was subjected to.”

I will just interject here that no education in the world is worth having your boy tortured, or beaten to death, at school!

Folks, get your children out of such a school, before they end up dead!

Is the myth of “peaceful Muslims” over for some of you die-hards yet?

We aren’t referring to a high school in the middle of ISIS town; we are talking about a public school in Punjab, India. A boy is tortured at school every day and is then finally beat to death by the entire class, while the teacher does nothing; and I might add, while the parents of the boy do nothing before it happened!

If you are a real Christian and your children are in public school, please visit the Home Education page.

Is anyone awake to the fact that the antichrist kingdom is all over the world and that kingdom’s subjects are NOT peaceful?

While Muslims throughout the world are screaming “allahu akbar” and killing people, politically correct Liberal Luciferian Lunatics (LLLs) are welcoming them into their nations with a smile.

If there is a “peaceful Muslim” in the world, that person does not know the Qur’an, or the basics of their own religion. In other words, they are just along for the family’s religious ride…

You don’t think so?

“We see that the Mahdi (Muslim messiah – the antichrist) will lead a world revolution that will institute a new world order based on the religion of Islam. The Mahdi will offer the religion of Islam to the Jews and Christians. If they accept it, they will be spared; otherwise, they will be killed. The ‘Prophet Jesus’ will be the executioner under Mahdi and Islam will be victorious over all religions.”

This is a quote from an American Islamic leader. Is there anything you don’t understand about that quote?

Let me break it down a little further. He said basically that everyone will accept Islam as their religion, or “BE KILLED!”

The LLLs would have you believe there are only a select few “radical” Islamists throughout the world (they won’t even say the word Islamic terrorists, even as those terrorists are chopping off heads!); just as Barack Hussein Obama once said that we shouldn’t judge the entire religion of Islam based on a “few radicals.”

First, they are stinking Muslim TERRORISTS, not radicals. Second, when these are chopping people’s heads off, killing and terrorizing people in every major nation of the world, they are not “just a few!” Third, in spite of what the LLLs would have you believe, even the imams, during their speeches, admit that they intend to conquer the world!

This information is so simple, even a child can understand it. So, you might be asking yourself why the leaders of the major nations, except President Donald Trump, promotes receiving the “peaceful Muslims” by the millions.

President Donald Trump gives God praise and he honors His name publicly, so that is exactly why he is not under any delusion.

Let me say that once again, President Donald Trump is not a servant of satan and he is not delusional.

The other leaders of nations, and the LLLs in this nation, such as Barack Hussein Obama, Hillary Clinton and Joe Biden, are all under satanic delusion and they will do exactly what satan wants them to do, because they are his servants.

Those of us who do not prefer to worship Lucifer, the moon god, son of the morning (Isaiah 14:12), whose crescent sits atop every mosque, and those of us who have decided not to lay our necks down on a chop block peacefully, are at war with Islam and we will always be at war with Islam, until the Lord returns!  That is when Jesus will slay the Assyrian (Isaiah 10:12,24,27,33), the antichrist – the Muslim Mahdi!

“Because iniquity shall abound, the love of many shall wax cold” Matthew 24:12.