Zero Hedge reported on Friday that “elements of the US Department of Defense (DOD) will simulate a ‘communications interoperability’ training exercise across the United States on November 4-6th.”

A notice sent out to all radio amateurs on October 24, 2017 (copy below), advised that “a national massive coronal mass ejection event (CME), which will impact the national power grid, as well as all forms of traditional communication, including landline telephone/cell phone, satellite and Internet connectivity,” would occur between November 4 through November 6, 2017. 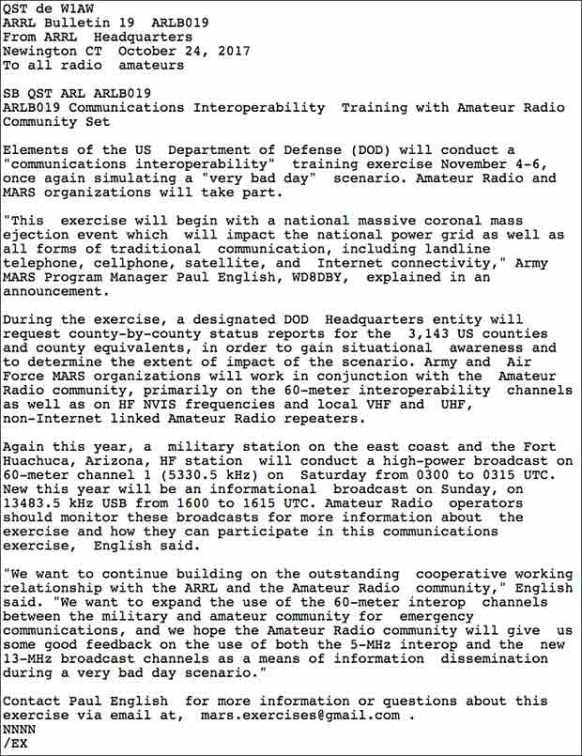 Zero Hedge is frequently linked to DrudgeReport.com headlines and it is one of the more reliable news sources.

The report stated that the announcement has not been widely distributed to media because it could “spark fear.”

A source was not quoted for that statement, so it could be the reporter’s opinion. I am more inclined to believe that, if it happens, it hasn’t been publicized much because certain factions actually want people to die during the test. A lack of any telephone/cell service means people can’t call emergency services.

At least if people are notified in advance, they can prepare and are more likely not to panic. Internet service and electricity wouldn’t be available for any purpose either. Vulnerable people have died from heart failure in less stressful situations.

Incidentally, according to Rob Dew of InfoWars, this exercise is slated to occur on ANTIFA’s “day of rage” across the US.

The ANTIFA are extremely violent Liberal Luciferian Lunatics (LLLs). Dressed like Islamic State terrorists (ISIS), they are known to viciously attack and beat people during their protests. They call President Trump a fascist and they actually want to overthrow him, or assassinate him!

It doesn’t seem likely that these two events happening at the same time is coincidental.

Every family should have a back-up plan and a place to meet if there is no phone or internet service. People shouldn’t want their children far from home on November 4-6th.

Don’t panic. Whether a grid shut down occurs in November, or at any other time, it never helps to panic. We aren’t going to make wise decisions if we are distressed.

Talk with your family and children now, about what they should do in such an event.

Talk with them about a real electromagnetic pulse (EMP) attack, if you haven’t already done so. In that scenario, we aren’t just talking no phone/internet and electricity; we are talking no phone, no electricity, no transportation (unless your battery is under a Faraday cage) and no running water either – for a long time!

First and foremost, especially in the day and hour in which we live, people need to know the Lord and know how to pray.

Jesus said these signs will occur in the last days:

“There shall be signs in the sun, in the moon and in the stars and upon the earth distress of nations with perplexity; the sea and the waves roaring (as in hurricanes)” Luke 21:25.