Watch the video above, if you haven’t already. Does this look like a peaceful protest to you? That is exactly what the Liberal Luciferian Lunatic media would have everyone believe.

While the masses stand around and look innocent, up closer to the border, Palestinian terrorists are firing weapons, setting fires and tossing petrol bombs, otherwise known as Molotov cocktails, at Israeli Defense Forces (IDF). They have publicly stated that their objective is to breach the border, invade Israel and bring back Palestine.

Among the Palestinian masses, you will also see children in the video above, as well as many other videos on You Tube covering the riots and IDF response.

Ask yourself if anywhere in the remotest part of your mind, you would consider bringing your children into such a violent conflict. Would you?

Men, possibly women, will fight for their ideologies; but just ask yourselves, who pushes their children into an area where there is violence and live munitions fired?

Who, except insane devil worshipers, would do such a horrible thing?

Since the start of the “protests,” actually riots, 41 Palestinians have been killed, some known terrorists have been captured by IDF, and more than 5,000 have been injured.

Are you going to bring your children into such a battleground, unless you have lost your mind?!

Palestinians said they “have nothing left to lose!”

Yes, they do, the lives of their children!

Hamas gunned down a bride at her wedding in Gaza (https://www.youtube.com/watch?v=vEud-cEjwQU), along with guests who were dancing, because dancing is not allowed. These people are oppressed, suppressed and depressed. Of course they want out of Gaza; but who in their right mind wants to live with these maniacs?

These people are satanically influenced and they need our prayers, especially for their children who are caught up in the fray. There is hope through prayer that Muslims will see the light of Christ and repent.

The Palestinians wanted Gaza, so Israel removed the Jews that lived there, some having homes there for centuries, even carrying them off of their properties in order to give Gaza to the Palestinians; after which Palestinians fired rockets into Israel, they dug tunnels to strike terror in Israel and they wage constant battles against Israel from Gaza.

This move was insane, but Israel wanted peace with Palestinians just that bad. It was the wrong move, because God already commanded them not to divide the land (Joel 3:2).

The Palestinians, focusing all of their resources on tunnels, rockets and terrorism, have decimated Gaza with their own hands. Now, they demand to rush the Israeli border to destroy Israel too.

How can such terrorists live within a peaceful democracy, such as Israel? Every where these people go, they bring their deadly, oppressive, horrifying religion with them, and they do everything within their power to impose their terror-religion on everyone else, or they will decapitate, crucify, or bomb you eventually!

How is it that anyone in their right mind believes Israel can allow these people to crash their border and let them into their peaceful nation?

Demonically inspired globalist LLLs, who believe the world is drastically overpopulated, and they see Islam as another means to cull the masses.

There will, in fact, be a global Islamic Caliphate (the antichrist kingdom), with much terror and bloodshed, before the Lord returns to “rule with His rod of iron”:

“I looked and, behold, a pale horse (original Greek = green, the color of Islam), and his name that sat on him was Death, and Hell followed with him; and power was given unto them over the fourth part of the earth to kill with the sword, with hunger, with death and with the beasts of the earth” Revelation 6:8. 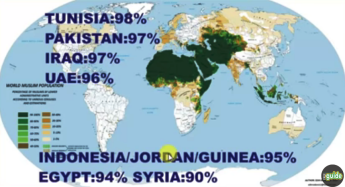 Screen shot: YouTube.com – Map showing Muslim nations (in green), which doesn’t even show the millions who live in non-Muslim nations. It is clear to see that Islam already covers one-quarter of the world.

“The number of the army of the horsemen were two hundred thousand thousand (200,000,000), and I heard the number of them, and I saw the horses in the vision and those who sat on them, having breastplates of fire (anything used for transportation in John’s day would have been described as a horse, other animal, or chariot; there was no vocabulary for military tanks, etc.) and of jacinth and brimstone, and the heads of the horses were as the heads of lions, and out of their mouths issued fire, smoke and brimstone. By these three was the third part of men killed, by the fire, by the smoke and by the brimstone which issued out of their mouths” Revelation 9:18.

During the Korean War, American tanks were painted to look like tigers. Painting Sherman and M26 Pershing tanks like tigers was used as a means of psychological warfare, because Koreans see the tiger as a symbol of power. John the Revelator could have seen painted tanks, when he said they had “heads of lions,” just as we used in the Korean war, or he could have seen some type of spiritual beasts attacking mankind. Either way, we need to remember that John’s vocabulary was limited to that of his day.

“I saw heaven opened and, behold, a white horse, and He that sat upon him was called Faithful and True and with righteousness He judges and makes war…and the armies which were in heaven followed Him upon white horses clothed in fine linen, white and clean. And out of His mouth went a sharp sword, that with it He should smite the nations, and He shall rule them with a rod of iron and He treads the winepress of the fierceness and wrath of Almighty God” Revelation 19:11, 14-15.

The heathen can rage (Psalms 2:1), and this battle will lead to the Gog-Magog war (Ezekiel 38), but the Lord will rule and reign after the seven-year tribulation (Matthew 24:21).

“And the Lord had on His robe and on His thigh a name written, KING OF KINGS AND LORD OF LORDS” Revelation 19:16.