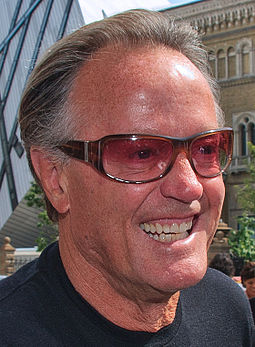 Some people are so evil, it shows in their countenance

Fonda made the despicable comments after it was widely publicized that the children of illegal immigrants from Mexico were being separated from their parents by Immigration and Customs Enforcement (ICE).

As soon as the atrocious ICE policies surfaced, and President Donald Trump had time to react, he signed an Executive Order prohibiting ICE from separating children from their parents.

This despicable separation of mother and child was likely an ICE policy long before President Trump took office, but he took care of the problem.

People should know that the United States President doesn’t personally write, or implement, government agency policies throughout the nation. Following the guidelines of federal laws, government agencies create many of their own internal policies.

Someone needs to tell Peter Fonda that President Trump does not write ICE policies, nor does he work at ICE. He only works at the White House, and he doesn’t even rotate periodically!

Dimwits should keep their mouths shut!

It would also be nice if someone would tell Fonda’s sister that the Vietnam War is over!

Fonda’s statements against President Trump’s young son, Barron, who is a very sweet boy, were viciously evil. His statements are so brutal and outrageously insane, that the man appears to be dangerous and he should be examined.

News sources reported that First Lady Melania Trump called the Secret Service for help. They need to arrest Fonda for that kind of solicitation against the President’s son!

This type of behavior is typical of LLL Hollywood actors and Democrats since President Trump took office; calling for vicious crimes against the president’s son; Saturday Night Live writer, Katie Rich, tweeted, “Barron Trump will be this country’s first homeschool shooter;” calls for the assassination of Trump publicly on quite a number of occasions, even by Missouri State Senator (D) Maria Chappelle-Nadal; consistent calls for his impeachment; and one comedian, Kathy Griffin, even acted out a mock beheading of President Trump!

We have had conservative presidents before, specifically President Ronald Reagan. No one called for the destruction of his family, his impeachment, assassination and certainly no one did a mock beheading of Reagan from 1981 – 1989.

What is different this time, about 30 years later?