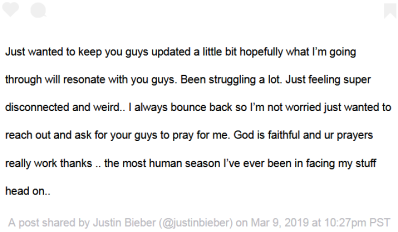 Justin Bieber asked people to pray for him from his Instagram account just a couple of days ago (3/9/19).

I thought it was interesting that he publicly asked for prayer, in that about two weeks ago, I transferred his name to my Prayer Book from a slip of paper I jotted his name on previously. I wrote a lot of names into my Prayer Book that day, so I could clear away smaller notes.

I have a page in my Prayer Book for “Family,” for “The Household of Faith,” for those requesting “Healing,” for “The Little Ones,” for “Those In Bonds” and “The Persecuted Saints,” for “Prophecies,” for “Neighbors,” for “Prayer Requests,” for “Ministries,” and I added a page for “Those God Laid On My Heart.”

I wrote Justin Bieber’s name on my “Those God Laid On My Heart” page, and his name just so happens to be the first name I entered. 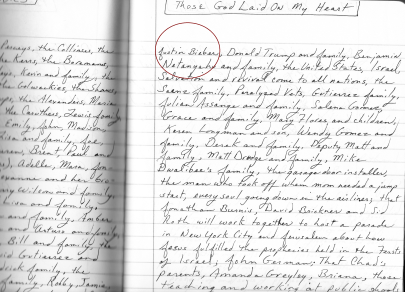 Justin Bieber’s mother is reportedly a Christian and he was baptized by a Pentecostal minister, according to Wikipedia. The eyes of the Lord are, no doubt, on Justin and the Lord moved on my heart to pray for him before he even asked for prayer publicly!

Isn’t that amazing? God said He “knows what you have need of before you ask Him.”

“When you pray, do not use vain repetitions, as the heathen do (Catholics do this with their multitude of ‘hail Marys’), for they think they will be heard for their much speaking. Be not like them, for your Father knows what you have need of before you ask Him” Matthew 6:7-8

I have been praying for Justin to surrender all of his heart and life to the Lord. When he does this, if he hasn’t already done so, he will have abundant peace. God requires total commitment from all of us; He doesn’t accept half-heartedness (Revelation 3:16; Matthew 19:16-22).

“Be anxious for nothing, but with prayer and supplication, and with thanksgiving, let your requests be made known to God; and the peace of God which passes all understanding shall keep your hearts and minds through Christ Jesus” Philippians 4:6-7

During the persecutions of Protestants by the Roman Catholics in Britain and Ireland, James Baynham, a reputable citizen in London, was burned at the stake for heresy. While chained to the stake, he embraced the fagots and said, “Oh, ye papists, behold! Ye look for miracles; here now may you see a miracle, for in this fire I feel no more pain than if I were in bed, for it is as sweet to me as a bed of roses;” thus he resigned his soul into the hands of his Redeemer. He was burned alive at the stake by Catholics for being a Christian – all in the name of God (the god of Catholics, who is Lucifer)!