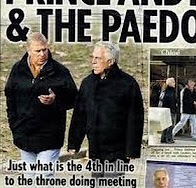 Epstein, one frequently mentioned in Pizzagate news/updates, has avoided justice for decades. Even when he was arrested in 2008, his political cohorts let him fly with an 18-month sentence, of which he served only 13 months, when he should have been locked up for at least decades – life, in my opinion.

Epstein was also found injured in his cell on Wednesday. Reports say he is “shocked” over his no bail situation.

Authorities believe he may have tried to commit suicide, so he has been placed on suicide watch.

Do you suppose Bill’s and Hillary’s knees are shaking about now, considering Epstein might decide to sing like a bird?

Our prayers are being answered, saints! (See news on this and other pedophile arrests:  https://signswonders.home.blog/2019/04/14/4-14-19-update-pedophile-arrests/)

“And He took a child and set him in the midst of them, and when He had taken him in His arms, He said to them…Whoever offends one of these little ones who believe in Me (He is speaking about new converts and little children, like the one He held in his arms as He was speaking [Law of Hermeneutics applies for double meaning]), it is better for him that a millstone be hanged about his neck and cast into the sea” Mark 9:36, 42

“Do not fret because of evildoers, nor be envious of the workers of iniquity, for they shall soon be cut down like the grass and wither as the green herb…A little that a righteous man has is better than the riches of many wicked, for the arms of the wicked shall be broken, but the Lord upholds the righteous…I have seen the wicked in great power and spreading himself like a green bay tree, yet he passed away, and behold, he was not. Yes, I sought him, but he could not be found” Psalms 37:1-2, 16-17, 35-36