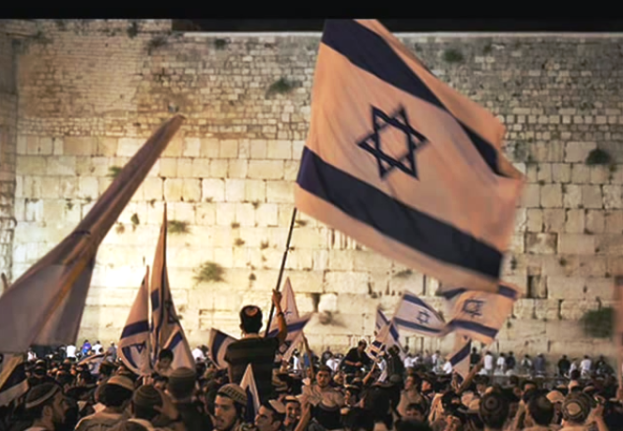 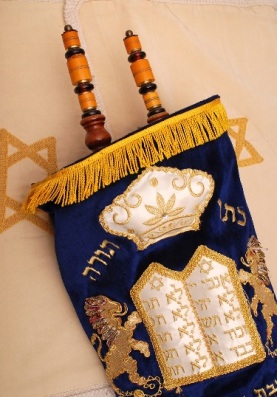 Looking for the Messiah?

The Word of God says:

“The burden of the Word of the Lord concerning Israel.  The saying of the Lord, who stretched forth the heavens and laid the foundation of the earth and formed the spirit of man within him: Behold, I will make Jerusalem a cup of staggering unto all the peoples round about, and upon Judah also shall it fall to be in the siege against Jerusalem.  And it shall come to pass in that day that I will make Jerusalem a stone of burden for all the peoples; all that burden themselves with it shall be sore wounded, and all the nations of the earth shall be gathered together against it” Zechariah 12:1-3.

As you ponder the above passages, it is impossible to miss the fact that these prophesies are being fulfilled right before our eyes today.  Jerusalem is a “sore spot” for the Muslims, Jews and Catholics alike.  The nations that surround Israel are all against him today.  There is no mistake.  As Zechariah penned his book about 2,530 years ago, he was making reference to these latter days.

“I will pour upon the house of David and upon the inhabitants of Jerusalem the spirit of grace and of supplications, and they shall look upon Me, whom they have pierced (who else was pierced besides Yeshua?), and they shall mourn for Him, as one mourneth for his only son, and shall be in bitterness for Him, as one that is in bitterness for his firstborn” Zechariah 12:10.

Have you ever considered who Zechariah is referring to in this passage?  Zechariah is speaking of the last days and he is speaking of one who has been ‘pierced’ and that the inhabitants of Jerusalem shall ‘mourn for Him.’  Who shall they mourn for?  Who are the inhabitants of Jerusalem looking for?  They are looking for the Prince, their Messiah, the One Ezekiel wrote of:

“Then He brought me back the way of the gate of the outward sanctuary, which looks toward the east, and it was shut.  Then said the Lord unto me, ‘This gate shall be shut, it shall not be opened, and no man shall enter in by it, because the Lord, the God of Israel has entered in by it, therefore it shall be shut. (The eastern gate remains sealed and shut to this day, although the other gates are open.  The gate remains closed until the Messiah comes and He will enter in at that gate.)  It is for the Prince, the Prince.  He shall sit in it to eat bread before the Lord; He shall enter by the way of the porch of that gate and shall go out by the way of the same” Ezekiel 44:1-2

Yeshua rode into Jerusalem on a colt (Matthew 21), fulfilling the prophecy of Zechariah 9:9,

“Rejoice greatly, O daughter of Zion; shout, O daughter of Jerusalem; behold, your King coming unto you; He is just and having salvation, lowly and riding upon a donkey, even upon a colt, the foal of a donkey.”

Yeshua entered the eastern gate, as foretold in Ezekiel 44:1-2, “He shall enter by the way of the porch of that gate” once again, so it remains shut until He returns.

Preceding chapter 44, Ezekiel spoke of the Lord who would fight for Israel, against all those nations that would come against Israel (Ezekiel 38-39).  Who will they see when the Lord fights for Israel in the last days?  Zechariah prophesied about the One who would come; the One they have pierced:

“I will pour upon the house of David and upon the inhabitants of Jerusalem the spirit of grace and of supplications, and they shall look upon Me, whom they have pierced (who else was pierced besides Yeshua?), and they shall mourn for Him, as one mourns for his only son, and shall be in bitterness for Him, as one that is in bitterness for his firstborn” Zechariah 12:10.

When the Messiah returns to destroy the enemies of Israel (Ezekiel 38-39), according to Zechariah’s prophecy, Israel will look upon Him and mourn “as one mourns for his only son.”  They will see the One they pierced, the One who died to redeem them, and He, once and for all, will defeat the enemies of Israel, for His beloved.

John the Baptist said of Him:

“The next day John saw Jesus coming unto him, and said, ‘Behold, the Lamb of God which takes away the sin of the world'” John 1:29.

As the Passover lamb signified Israel’s deliverance from death, so it was a type and shadow of the Redeemer – Yeshua – to come:

There will never be another Savior, Jewish Messiah, like Yeshua; He was the One, the only One.  The Lamb slain for the sins of the world (slain on the actual day of Pesach!); the One who loved us that much.  He came and died for the sins of Israel, the firstborn of God (Exodus 4:22), and for “all who believe” (Acts 10:43).

As He ascended into heaven, the angel said:

“Why stand ye gazing up into heaven?  This same Jesus, who is taken up from you into heaven, shall so come in like manner as ye have seen Him go into heaven” Acts 1:11.

The prophet Daniel also spoke of the Messiah’s appearance and then being “cut off, but not for Himself” (Daniel 9:26).  Yeshua was crucified, but not for Himself. His death provided the shed blood of the Passover Lamb, to redeem the souls of you and me – all who would believe.

If you still aren’t convinced, but you believe in the prophecies of the prophets, study Daniel’s prophecy, specifically what the archangel Gabriel told him about when Messiah would come (Daniel 9:21-27), before the destruction of the Temple (70 AD), and He will return (Enoch Chapter 1 and Jude 1:14)! There is no mistake, if you know the prophecy of Daniel and believe it!

The much respected Rabbi Yitzchak Kaduri, for whom about 300,000 people marched in his funeral procession, came to the truth of who the Messiah is. He left a sealed message with a request that it not be opened until one year after his funeral. When the message was unsealed, it was revealed that he named Yehoshua (Yeshua) as the Messiah. In addition to that, he prophesied that Yehoshua would return after Ariel Sharon dies. Ariel Sharon passed on January 11, 2014. If the prophecy is true, which I believe it is, and for the reason of other prophecies being fulfilled, Yeshua will return shortly.

The prophets of God said that a Savior would come into the world to redeem man and save him from the penalty of sin. Yeshua is the profound fulfillment of prophecies given thousands of years ago:

The Messiah would be born of a virgin

Prophetic Scripture:  “The Lord Himself will give you a sign: Behold, a virgin will conceive and bear a Son and will call His name Immanuel (meaning God with us – among numerous other names identified by the prophet Isaiah).”  Isaiah 7:14 (~740 BC).  Fulfilled:  “In the sixth month, the angel Gabriel was sent from God into a city of Galilee named Nazareth, to a virgin espoused to a man whose name was Joseph, of the house of David, and the virgin’s name was Mary.  The angel came to her and said, “Hail, you who are highly favored; the Lord is with you; blessed are you among women.”  The angel said to her, “Fear not, Mary, for you have found favor with God.  Behold, you will conceive and bring forth a Son and you will call His name Jesus (Yeshua in Hebrew, which means Salvation).”  Luke 1:26-31.

The Messiah would be born in Bethlehem

Prophetic Scripture:  “You, Bethlehem Ephratah, though you are little among the thousands of Judah, yet out of you shall He come forth to Me, He that is to be ruler in Israel, whose going forth has been from old, from everlasting.”  Micah 5:2 (~700 BC)  Fulfilled: “Joseph went up from Galilee, out of the City of Nazareth, into Judea to the City of David, which is called Bethlehem, to be taxed with Mary, his espoused wife, who was great with child.  So it was while they were there, the days were completed that she should deliver, and she brought forth her first born Son and wrapped Him in swaddling clothes and laid Him in a manger, because there was no room for them in the inn”  Luke 2:4-7.

The Messiah would be declared the Son of God
Prophetic Scripture:  “I will declare the decree: The Lord said to me, “You are My Son; this day I have begotten You.” Psalm 2:7 (~900 BC).  Fulfilled:  “Lo, a voice came from heaven, saying, ‘This is My beloved Son, in whom I am well pleased'” Matthew 3:17.

The Messiah’s triumphant entry into Jerusalem
Prophetic Scripture:  “Rejoice greatly, oh daughter of Zion; shout, oh daughter of Jerusalem: behold, your King comes to you; He is just and has salvation, lowly, and riding upon a colt, the foal of an ass” Zechariah 9:9 (~520 BC).  Fulfilled:  “They brought the colt to Jesus and cast their garments on him and He sat on him.  And they that went before Him and followed Him cried, saying, ‘Hosanna, blessed is He who comes in the name of the Lord.’  And Jesus entered Jerusalem and into the temple…” Mark 11:7,9,11.

The Messiah would be rejected by the people

Prophetic Scripture:  “He is despised and rejected of men; a man of sorrows and acquainted with grief, and we hid our faces from Him; He was despised and we did not esteem Him”  Isaiah 53:3 (~740 BC).  Fulfilled:  “They cried out, ‘Away with Him, away with Him, crucify Him.’  Pilate said to them, ‘Should I crucify your King?’  The chief priests answered, ‘We have no king but Caesar’  John 19:15.

The Messiah would be crucified among criminals
Prophetic Scripture:  “I will give Him a portion with the great and He will divide the spoil with the strong, because He poured out his soul to death and He was numbered with transgressors; He bore the sins of many, making intercession for the transgressors”  Isaiah 53:12 (~740 BC).   Fulfilled:  “He was crucified with two thieves, one on His right, and the other on His left” Mark 15:27.

As the prophesies of Daniel, Isaiah, Ezekiel, Zechariah, Hosea and others, come to pass before our eyes, we know that we are living in the last days before the return of the Lord.  If you haven’t received Yeshua the Messiah, please visit the How Can I Be Saved page.  There is no time to lose; His return is so near!

Never a man spoke like this man, Jesus (Yeshua) Christ, the Son of the living God.  No one fulfilled the prophecies of the Messiah to come like Jesus.  He died to pay the penalty for our sins, so we could have eternal life.  If you haven’t received Jesus as your Lord and Savior, won’t you take care of your eternal soul and destiny today?  You only need to say a simple prayer form your heart, asking God to forgive you of your sins; and after you receive Jesus as your Lord and Savior, follow His teachings outlined in the Word of God.

If you are interested in communicating with a ministry for Jews and Gentiles who have accepted Yeshua as the Messiah, please visit Rabbi K A Schneider’s website, www.DiscoveringTheJewishJesus.com