Two little girls, 9 and 7, are sent on a suicide mission in Damascus, Syria. The family is of the Obama-backed al-Nusra Muslim terrorists. Tell me this isn’t satanic!

You won’t hear this story on NBC, CBS, CNN, or even Fox News. The reason why? They are all, to some degree or another, propagandized media muppets and, quite frankly, this news incriminates Barack Obama, so they aren’t going there.

Mainstream news isn’t going to report this disgusting news because Obama funds al-Nusra fighters in Syria, because they all want to take out Christian sympathizer Bashar al-Assad.

Think about this. Here is a Muslim al-Nusra terrorist, funded by Obama, who sends his two little girls, 9 and 7, down to the corner police station to blow themselves up, along with the police station. Now how does that make Obama look? Well, it makes him look like the terrorist-funding Muslim terrorist I have been saying he is for about the last seven years!

If mainstream news published this, Obama would have no grounds to criticize Assad’s attack on the Obama-backed “rebels,” or the deadly force used in Aleppo. We can’t have that, now can we?

In the meantime, the Islamic State (ISIS) forces captured two Turkish troops in Aleppo. They hauled them out to the desert in a cage, walked them out of the cage like dogs, on all fours, chained them up, dousing them and a long chain attached to them with fuel, then set the chains on fire, burning them up alive. The chains burned until the flames reached the troops and then burned them up alive in the desert! 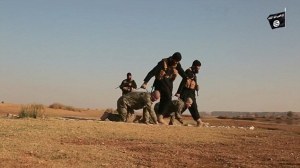 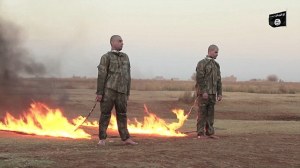 US PROPAGANDIZED NEWS MEDIA ONLY WANT YOU TO BELIEVE THAT LITTLE CHILDREN ARE BEING KILLED IN ASSAD’S WAR AGAINST “INNOCENT CIVILIANS AND CHILDREN,” which is a lie – FAKE NEWS!

There may be some child casualties, which comes with every war, but Assad’s forces are fighting Obama-backed al-Nusra and ISIS TERRORISTS in Aleppo! That’s what you need to know!

Unless you visit Christian/conservative websites, you likely didn’t hear about the four men tied up and burned alive in front of their families by ISIS in Deir Ezzor, about 450 km northeast of Damascus. These men were tortured and burned alive for “treason.”

If you want to know what is really going on in the world, forget CNN, ABC, NBC, Fox News and the like, because you aren’t going to find it there. In fact, their real agenda is to keep you distracted from the REAL NEWS.

Perhaps after Donald Trump takes office, there may come a change. It’s unlikely, because the media is actually controlled by the globalist Bilderbergers and they have an ideology apart from Trump’s.

These Muslim terrorists, beasts of the antichrist kingdom, need to be bombed to hell, where they are headed. Let’s just give them a little boost and save some innocent lives in the meantime! Our troops under Obama’s command are required to send fliers down to these vile beasts, warning them to flee and save themselves before the bombing begins.

What kind of girly-fighting is that?

That kind of fighting is actually no fighting at all. It’s called “sleeping with the enemy!”

Donald Trump said something not too long ago that I appreciated. He said our troops, once he takes office, will no longer wear high heels!

Trump was referring to Obamie’s requirement that our cadets wear red high heels as part of their training. This is absolutely true; I wrote about it last year. How would a traitor in the Oval Office undermine our military? Take a look at the video and find out.

Those who knew Obamie in college said he was gay. Does that tell us something about his war capabilities? He is an antichrist girly-man!

All antichrists have the same MO (mode of operation).

The prophet Daniel wrote this about the last antichrist:

“Neither shall he regard the God of his fathers, nor the desire of women, nor regard any god, for he shall magnify himself above all” Daniel 11:37.

Jesus said this about the little children:

“Whosoever shall offend one of these little ones that believe in Me, it is better for him that a millstone were hanged about his neck and cast into the sea” Mark 9:42.

BREAKING NEWS: Two of my websites have been censored (by a different server) and I have been banned from publishing. I am trying to work with the server to regain access to those websites, but the UUN (Useless United Nations) has demanded censorship. Infowars.com, PrisonPlanet.com, Breitbart.com and others have been targeted. In the meantime, we are preparing to fight.