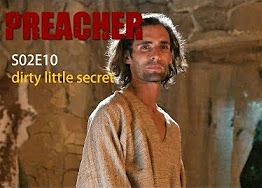 AMC showed a depiction of Jesus and a woman in graphic sex scenes during season 2 of Preacher.

The Independent reported Christians are outraged, quoting the head of the Catholic League, Bill Donohue, as saying the scene was “an assault on the sensibilities of all Christians.”

That’s it? An “assault on the sensibilities…?”

The Independent also quoted an ultra-conservative website NewsBusters as saying the scene was “embarrassingly crass” and “so, so, so wrong,” and that the writers are “depraved.”

The “depraved” comment is now hedging closer to the truth. 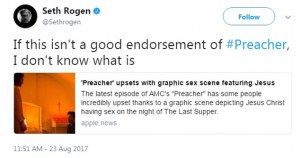 So, you like those comments, Seth Rogen? How about this one:

You and all of your cohorts in producing and formulating this film are vile, evil, wretched and full of the devil! If you don’t repent and get delivered of your abominable demons, you will all burn in hell forever! 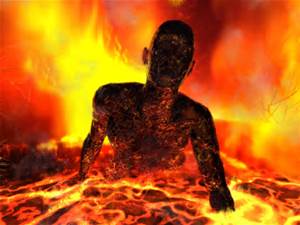 Here is a little glimpse of what you are heading for! Not for a month, a week, a day, or an hour, but throughout all eternity; you and your evil impish friends will burn for what you have done to the image of the Son of the Most High God!

A man by the name of Tyson Ritter played the character of Jesus. He obviously does not fear God. He will learn the fear of God by the vengeful hand of God Almighty for such blasphemy!

I did not watch this vile show, and no one should dare watch it, unless they want to be spiritually affected in the most evil way. Just hearing about it was enough to understand how evil it is. The fact that this filth can be aired for anyone to view, even children who might come across it, is a serious reminder of what time it is prophetically.

GOD WANTS US TO KNOW WHAT TIME IT IS, FOLKS!

Even Seth Rogen was shocked it was aired!

Does no one fear God in the movie industry anymore?

I pray that true Christians chime in on their social media and websites about how wicked, evil and vile this production is and call for a boycott of AMC, the producers and everyone involved.

“There are certain men crept in unawares, who were before of old ordained to this condemnation, ungodly men, turning the grace of our God into lasciviousness and denying the only Lord God and our Lord Jesus Christ. I will, therefore, put you in remembrance, though you once knew this, how that the Lord, having saved the people out of the land of Egypt, afterward destroyed them that believed not…Even as Sodom and Gomorrah, and the cities about them in like manner, giving themselves over to fornication and going after strange flesh, are set forth for an example, suffering the vengeance of eternal fire” Jude 1:4-5,7.