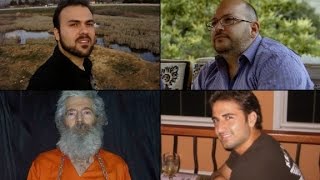 A senior Obama administration official said concerning the detained Americans, “Secretary Kerry and myself, both separately and together, have had more than one conversation during the course these – this negotiating round,” reported PJMedia.com.

“More than one conversation?” That doesn’t sound like a very fervent appeal for our American citizens!

Iran needed their heavy sanctions lifted, they certainly wanted the billions of dollars the US was ready to release upon making a deal, and they most definitely want to continue their nuclear arsenal production unhindered under the guise of a “ nuke deal;” but what did America need?

Obama made a despicable nuclear deal with Muslim terrorists, who consistently chant “Death to America” and “Death to Israel!”

Americans received nothing, not even our hostages! What does this tell us about the caliber of the person living in the White House?

Obama doesn’t care about America’s safety, nor the safety of Israel. He does care about furthering Islam throughout the world, by initially transforming America into a Socialist regime.

Hillary Clinton will be no better, as the Clinton Foundation rakes in Arab money, not to even mention the fact that she is a radical Socialist Saul Alinsky groupie.

The Prophet Isaiah foretold about these liberals of the last days,

“The vile person shall no more be called liberal (that’s right, they call themselves Progressives now), nor the churl said to be bountiful (megarich); for the vile person will speak villainy and his heart will work iniquity, to practice hypocrisy (such as in saying one is a Christian, when actually a Muslim, such as hiding one’s membership in the Socialist New Party to run for president as a Democrat, and coming up with a fraudulent birth certificate to hide one’s alien status) and to utter error against the Lord, to make empty the soul of the hungry and he will cause the drink of the thirsty to fail” Isaiah 32:5-6.

This “deal” Obama made with Iran, without getting our American hostages out of Iran, was another swift kick in the faces of all Americans by Barack Hussein Obama!