A senior Obama administration official said concerning the detained Americans, “Secretary Kerry and myself, both separately and together, have had more than one conversation during the course these – this negotiating round,” reported PJMedia.com.

“More than one conversation?” That doesn’t sound like a very fervent appeal for our American citizens!

Iran needed their heavy sanctions lifted, they certainly wanted the billions of dollars the US was ready to release upon making a deal, and they most definitely want to continue their nuclear arsenal production unhindered under the guise of a “ nuke deal;” but what did America need?

Obama made a despicable nuclear deal with Muslim terrorists, who consistently chant “Death to America” and “Death to Israel!”

Americans received nothing, not even our hostages! What does this tell us about the caliber of the person living in the White House?

Obama doesn’t care about America’s safety, nor the safety of Israel. He does care about furthering Islam throughout the world, by initially transforming America into a Socialist regime.

Hillary Clinton will be no better, as the Clinton Foundation rakes in Arab money, not to even mention the fact that she is a radical Socialist Saul Alinsky groupie.

The Prophet Isaiah foretold about these liberals of the last days,

“The vile person shall no more be called liberal (that’s right, they call themselves Progressives now), nor the churl said to be bountiful (megarich); for the vile person will speak villainy and his heart will work iniquity, to practice hypocrisy (such as in saying one is a Christian, when actually a Muslim, such as hiding one’s membership in the Socialist New Party to run for president as a Democrat, and coming up with a fraudulent birth certificate to hide one’s alien status) and to utter error against the Lord, to make empty the soul of the hungry and he will cause the drink of the thirsty to fail” Isaiah 32:5-6.

This “deal” Obama made with Iran, without getting our American hostages out of Iran, was another swift kick in the faces of all Americans by Barack Hussein Obama!

I believe it is fitting to reprint this article today, Memorial Day (Pacific Time), originally published 11/30/13.

American Pastor Saeed sentenced to 8 years in the worst Iranian prison for sharing the gospel. 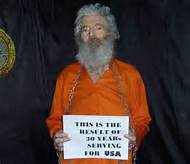 Former FBI Agent Robert Levinson. Sign reads, “This is the result of 30 years serving for USA.” Obviously written by his Iranian tormentors. Obama and Kerry didn’t even mention his name to Iranian officials while discussing the nuclear deal. 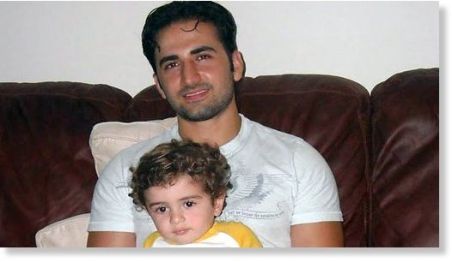 When Israel wanted the release of Gilad Shalit, an IDF soldier who had been kidnapped by Hamas, held by Muslim terrorists for more than five years, they had to release 1,027 Muslim terrorists in order to get him back from Hamas. Hamas militants are maniacal, but they aren’t totally stupid.

Neither is Barack Obama, or John Kerry stupid, but they just don’t care (just like Obamadon’tCare)!

The American Center for Law and Justice (ACLJ) has been campaigning to gain the attentions of Congress and Barack Obama in behalf of American hostages in Iran, especially prior to and during the nuclear talks with Iran.

ACLJ waged a major campaign, sending letters to the Obama administration and Congress, including thousands of signatures of Americans, pleading with them to include our American hostages in the negotiations.

NOT ONE WORD WAS SAID BY BARACK OBAMA OR JOHN KERRY ABOUT OUR AMERICAN HOSTAGES IN IRAN WHEN THE DEAL WAS SEALED!!!

This is a major slap in the faces of the American people!

If Barack Obama or John Kerry’s son was being held in prison, or hostage there, and most likely tortured in an Iranian prison, you better believe that matter would have been first on the agenda!!!

Obama and his cohorts have shown nothing but disdain and disrespect for our military, by cutting military benefits, since he “took office,” and by allowing serious breaches in security, which has brought about the deaths of way too many Navy Seals and other military personnel in Iraq on his “watch” – NOT!

Rush Limbaugh is right about one thing and that is that Barack Hussein Obama has a vendetta against the American people, and that story goes a long way. To summarize the critical problem briefly, Barack Hussein Obama is a Socialist who detests our Constitution and has already openly admitted that he wants it modified (annihilated is more like it). He has already signed execute order after executive order, which are unconstitutional, such as the National Defense Authorization Act, which stipulates that he has the power alone to arrest and detain US citizens indefinitely without a trial! He is vehemently against capitalism, which is foundational to our nation and freedoms. He already wrote in his book, “Dreams from My Father,” that if things turned “ugly,” he would back Muslims (not Americans!). Do you get it?

NOW, and only after striking a deal with Iran, Barack Obama is trying to save face with Americans by asking Iran to release our hostages! NOW, he is asking; why not BEFORE a deal was made?

I want to ask you readers only one question, How would you feel about Barack Hussein Obama and John Kerry IF YOUR SON, BROTHER, OR FATHER WAS BEING HELD HOSTAGE IN HOSTILE IRAN, BUT NOT ONE WORD WAS MENTIONED IN THEIR BEHALF, FOR THEIR RELEASE, BEFORE A DEAL WAS STRUCK WITH IRAN?

A demon from the pits of hell inhabits the man in the White House, and those who work with him are his demonic cohorts.

“For we wrestle not against flesh and blood, but against principalities, against powers, against the rulers of the darkness of this world, against spiritual wickedness in high places” Ephesians 6:12.

Are you prepared to stand before God and give an account of the life you have lived on this earth? If not, please visit the How Can I Be Saved page of this website. Your eternal destiny depends on it. God bless you.