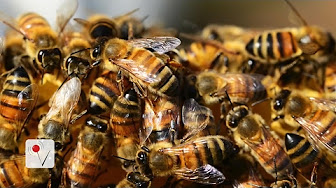 BEES DIE IN THE OCEAN

Thousands of dead and dying bees were found washed up on a Florida beach Tuesday.

Some residents walking along the beach in Naples, Florida, were reportedly stung by the dying bees.

A bee expert told WBBH that seeing bees wash up at the beach is very unusual.

The exact cause of this particular die off on the beach is unknown.

Beekeepers have reported massive die-offs for a number of years, putting some beekeepers completely out of business.

Bees are vital for pollination, which is critical to our food supply.

Floods and droughts have greatly impacted farming in the United States and the massive bee die-offs have also played a role in hiking prices and causing shortages.

You might have noticed that soup cans are smaller; 5 lb bags of sugar have been reduced to 4 lbs; a gallon container of ice cream has been reduced to ¾ of a gallon, etc. Not only have prices increased, but you are getting less for your money.

People need to pray and turn to the Lord, because He is the only one who can forgive the sins of the nation and heal the land.

President Donald Trump is God’s mercy extended the United States on account of the prayers of His people. Contrarily, we see liberal unborn baby killers and those in favor of open borders, which allow Muslim terrorists and criminal immigrants to walk in freely, fighting our president every step of the way.

Liberals are evil, they fight against God’s laws and they bring the wrath of God upon a nation (Isaiah 32:5-12).

“If My people, which are called by My name, shall humble themselves and pray and seek My face and turn from their wicked ways, I will hear from heaven and will forgive their sin and will heal their land” 2 Chronicles 7:14.

God was speaking to Israel in this passage of scripture, but it also applies to any of God’s people that have gone astray under the New Covenant granted through Jesus Christ, the Son of the Living God. He is calling for people to pray and be spared from the tribulation to come, which will cause the Holocaust to pale in comparison, according to the Words of Jesus,

“When they shall say, Peace and safety, then sudden destruction comes upon them, as travail upon a woman with child, and they shall not escape” 1 Thessalonians 5:3.

The angel of the Lord spoke to me upon waking on the morning of November 27, 2011, and he said, “With the sleight of hand, the nations will be turned upside down.”

Thus, we are also seeing the Islamic caliphate invasion throughout the great nations of the world; the antichrist kingdom rising.