* I found this article, and many other Pizzagate Updates, in Private view status, but I didn’t privatize them. I am republishing them for Public view again on 9/3/20. If this article disappears again, please know that the publisher (elim20) did not remove it!

** The video has been removed by You Tube, as many other incriminating videos have been removed.

AN INTRODUCTION TO PIZZAGATE

David Seaman is a journalist and former writer for Huffington Post. After he wrote about Hillary’s health issues during the presidential campaign, Huffington Post fired Seaman; the reason, of course, being no one in mainstream news reporting gets away with writing anything truly negative, that might have hurt Hillary’s chances of winning the election.

Since that time, Seaman has learned a lot about the globalists and their agenda and the means whereby they intend to succeed. He also learned about PizzaGate.

Seaman is now on a campaign to expose the DC pedophiles – and God bless him!

Seaman’s friends are concerned about his security, and rightly so; although other colleagues have “washed their hands” of him, opting rather to make it to White House reporting.

As an introduction to PizzaGate, if you are not already aware, you can follow this link to Seaman’s third video regarding his findings (the first was censured, so he deleted it altogether, and the second one is embedded above).

David Seaman has vowed to stay on top of this story and expose the pedophiles, child torturers and child killers in Washington and those connected to them.

Julian Assange, CEO of Wikileaks, can be thanked for the original leaks about Anthony Weiner’s emails, which led to PizzaGate, but Obama and his cronies would like to shut him up. Assange has taken refuge at the Ecuadorian Embassy in London, if he is still there. He actually hasn’t been seen since October 3, 2016. It has also been a deadly year for Wikileaks staff. People are still dying to vindicate the Clintons and their cohorts: 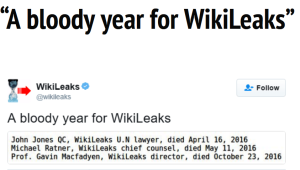 The New York Police Department handed over their findings on PizzaGate to the FBI, but James Comey did his part to cover the crimes and Loretta Lynch also refused to prosecute – cowards! It remains to be seen what the NYPD does with their information, because they are outraged.

Monica Petersen and Max Spiers have already been killed for looking into the PizzaGate crimes, but David Seaman refuses to walk away from what he knows.

Please pray for David’s safety and the safety of all of us who write, publish videos and blog about these crimes and others. 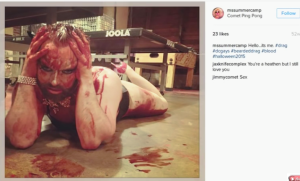 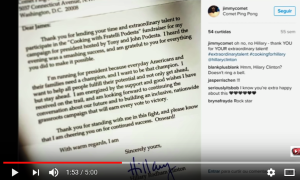 A letter from Hillary to thank James (Jimmy) for his help.  Screen shot: YouTube.com 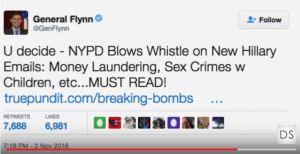 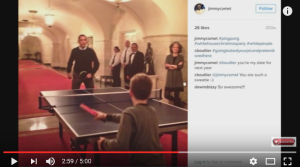 Obama is included in the scandal.  Screen shot: YouTube.com

As long as I am able to do so, I will also be reporting. I have been experiencing a great amount of connectivity issues (interruptions) and I am once again not certain if, or how long, I can remain online.

“As it was in the days of Lot, they did eat, they drank, they bought, they sold, they planted, they builded; but the same day that Lot went out of Sodom, it rained fire and brimstone from heaven and destroyed them all. Even thus shall it be in the day when the Son of man (Jesus) is revealed” Luke 17:28-30.

What were the people doing in the days of Lot that brought judgment upon Sodom? Well, the name of the city is reflective of their prominent sin, which God abhorred. This is what is going on today also, with public schools literally teaching sodomy in their “sex education” curriculum. It’s nothing short of gross child abuse and no parent, NO PARENT, should have their child enrolled in a public school. Even if this abuse hasn’t come to your child’s school yet, these devils intend to defile every child – eventually. God instructs us to teach our own children (Deuteronomy 11:18-19), not hand them over to the God-less for instruction. (Please visit the Home Education page for more information, even if you believe you aren’t able to home educate. The page includes important information for you.)

Is it coincidental that the highest government leaders in the nation are sodomites and pedophiles, as the schools have begun teaching little 10-year-olds SODOMY, FOR CRYING OUT LOUD!?

Please take notice when I say that God rained fire and brimstone upon the City of Sodom and destroyed the inhabitants for less crimes than we are seeing today (Genesis 18-19). At least, as far as we know, the sins of Sodom were among adult fornicators, not the children!

Jesus said He would return in an hour when we are not expecting Him (Matthew 24:44). People believe mayhem will precede the Lord’s return. However, as we read the passage of scripture (above) quoted from Luke 17, we need to remember that Jesus said people would be eating, drinking, buying, selling, planting…Does that sound like mayhem? There will be a semblance of normalcy when He returns. There will be no warning, except for the spiritual signs Jesus shared with us. Christians who know God’s Word understand what these signs are, but the wicked are blind to them.

Before we all face eternity, friends, there are two things that are imperative, repent, if you need to, and understand God’s Holy Word. Read the Word and pray.