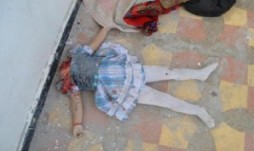 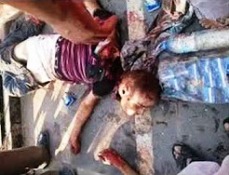 In that the Luciferian media generally do not publish news about the Christian genocide still taking place in Syria and Iraq, you might have thought the slaughter has ended. Not so!

I received an email recently from Jay Sekulow, Chief Counsel for the American Center for Law and Justice (ACLJ), to advise that “Christians are being exterminated at a horrific pace. It’s expanding.”

Albeit, they DID NOT report that Muslim terrorists are crucifying Christian children in Syria! NO, not Bashar al-Assad, who is a conservative Alawite Muslim and who has always been at peace with Christians in Syria. The Christian children being crucified, beheaded and buried alive are being slaughtered by the Islamic State and Syrian rebels, many of whom have pledged their allegiance to the Islamic State. Mainstream media will report an occasional suicide bomber and casualties, especially if the casualties are many, but they will not report the heinous slaughter of Christian children and the ongoing genocide of Christians. Why do you suppose that is?

The Luciferians have a depopulation agenda going on, which especially targets Christians, and if the populations are aware of the real genocide, they might do something about it!

Tragically, President Donald Trump has Muslim terrorist sympathizers surrounding him from the Luciferian globalist faction, which he needs to boot out of his administration!

He is certainly headed in the right direction after firing DC pedophile sympathizer James Comey from the FBI!

In Iraq, Muslim terrorists are burning Christian girls ALIVE! They have thrown about 250 children into a dough mixer; they have beheaded children in front of their parents!

Please visit the ACLJ websites for updates and to support the cause.

“They shall deliver you up to be afflicted and shall kill you, and you shall be hated of all nations for My name’s sake” Matthew 24:9.

The Apostle Paul wrote to a young minister, Timothy,

“Yes, and all that will live godly in Christ Jesus shall suffer persecution” 2 Timothy 3:12.

What, you are a Christian, but you aren’t suffering persecution? Perhaps you need to come out of the closet.