FATHER OF ORLANDO TERRORIST SEEN SITTING BEHIND HILLARY AT RALLY

The father of Omar Mateen, the Orlando terrorist, an Afghan and strong supporter of the Taliban, was seen sitting behind Hillary at her recent rally.

Birds of a feather flock together, do they not?

Why do you suppose this likely Muslim terrorist is not deported, or arrested?

Barack Hussein Obama sits in the White House, stealthy Muslim terrorist that he is, that’s why.

Why do you suppose Mateen is sitting behind Hillary at her rally smiling? Mateen knows she is aligned with Muslim terrorists, who drop bribes into the Clinton Foundation, and that Huma Abedin, Hillary’s top aid, is a Muslim Brotherhood operative, that’s why!

A senior Afghan intelligence source told CBS that Mateen’s show has an anti-American and pro-Taliban slant. During his program, Mateen dons military garb and he doesn’t speak English. 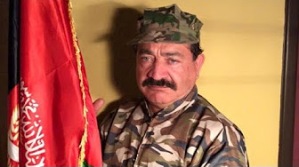 I would say it appears Mateen Sr is a Taliban jihadi.

Again, why isn’t this anti-American, Taliban terrorist deported, or arrested? You might ask yourself why Barack Hussein Obama and Hillary Rodham Clinton want to import potential terrorists – forget getting rid of any that are already here!

Obama and Hillary are Liberal-Progressive-Socialist-Marxist-Leninist-Communists, Obama is a Muslim, and Hillary will do anything to keep Muslim terrorist money flooding into the Clinton Foundation.

That smile on Mateen’s face looks like a pompous grin that says, “This American woman running for US President supports us!”

As Donald Trump said, Mateen must like what Hillary has to say (or he wouldn’t be there).

One place you likely won’t find Mateen is a Donald Trump rally!

“Can two walk together (or in the same direction), except they agree?” Amos 3:3.

Hillary is positioned by the Bilderbergers to win. Do we want this person in the White House?

Wikileaks exposed an email written by Hillary about sacrificing a chicken in her backyard to Moloch. 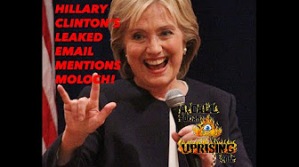 The ancient Word of God tells us that terror will reign over God-less nations,

“I also will do this to you: I (God) will even appoint over you terror, consumption, and the burning ague that shall consume the eyes and cause sorrow of heart, and you shall sow your seed in vain, for your enemies shall eat it” Leviticus 26:16.

“Your fierce wrath goes over me; your terrors have cut me off” Psalm 88:16.

Americans are in the throes of inevitable terror, unless enough of her citizens repent and denounce the abominations that are now blatant and rampant in the US. While she slept, the enemy of our souls has ravaged America’s youth via NWO public school curriculum, violence on TV and videos, lack of godly and moral instruction, but rather godlessness, exposing children to sexual perversions, even in the classrooms, abortions, drugs and alcohol.

Furthermore, the nation is ready to implode economically.

There is a small window of time to pray, repent if necessary, and turn to God for personal salvation and the salvation of this nation.

Donald Trump is working hard to help save the nation, but God has the last say.

“The wicked shall be turned into hell, and all nations that forget God” Psalm 9:17.