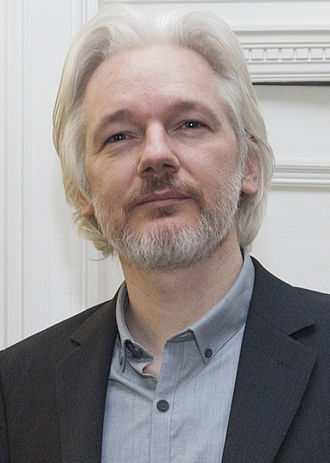 The case of Julian Assange is before a British judge, Chief Magistrate Emma Arbuthnot, who will decide on February 6, 2018, whether or not to vacate an outstanding arrest warrant.

Assange has been in the Ecuadorian Embassy in London for the last five and a-half years, where he sought asylum after skipping bail to avoid being extradited to Sweden on a bogus rape charge, which has since been dropped. Britain, however, still holds their warrant active for Assange’s failure to appear in 2012.

The 2012 appearance was to address Sweden’s bogus rape charge, but still the British are tenacious in going after Assange.

Apparently, the tea drinkers are really after blood!

Julian Assange has been holed up in a small room for over five and a-half years, primarily because if he leaves the embassy with a warrant outstanding, he could be extradited to the United States.

Attorney General Jeff Sessions and his cohorts are more concerned about the “fruit of the poisonous tree,” than they are about bringing charges against DC pedophiles, like those implicated in the Wikileaks emails, for example:

The following shot isn’t from “poisonous fruit,” it is a You Tube screen shot of Google Maps:

Screen shot: YouTube.com – pizza is used as a front for pedophile activities (“Pizza Mansion” has since been scrubbed from Google Maps)

This map shot, put together with the following video, is enough to freeze your bones: (https://www.youtube.com/watch?v=7b273RhFHCY)

It seems Sessions and FBI Director Christopher Wray still aren’t interested (you or I would be sitting in jail since last year – without bail). Sessions is only interested in taking down Julian Assange for exposing all of the crimes!

Speaking of “taking down” someone, a co-creator of Wikileaks, James Dolan, was found dead on January 9, 2018, at only age 36, ruled a “suicide,” as always.

Sure, just like Aaron Swartz (26) co-creator of “DeadDrop,” later known as Wikileaks, committed suicide; Assange lawyer John Jones (48) committed suicide and Assange lawyer Michael Ratner (72) died rather quickly of cancer, in less than a month of each other; Wikileaks Director Gavin Macfadyen died of cancer (all Wikileaks-related deaths occurred within six months of each other); Seth Rich (27), who leaked Hillary’s emails, was murdered, shot down like a dog in the street; just like Bill and Hillary Clintons’ very long, long list of “friends,” accusers and body guards, who died in the prime of their lives: (https://www.youtube.com/watch?v=nIzijQc1C5U)

Earlier this month, the US ended their grand jury proceedings against Assange, likely because President Donald Trump insisted.

Let’s pray for Julian Assange’s exoneration and freedom to leave the Ecuadorian embassy, for his safety and, most importantly, his salvation, if he isn’t saved.

Julian Assange is a hero. After all, who needs “security” if Assange and his colleagues can expose child-torturing, child-murdering pedophiles and the like!

Honestly, wouldn’t you rather have an advocate against such crimes look into everyone’s emails to prevent such heinous crimes against children?

They can look at my emails all day long, as long as I live, if they expose this scum of the earth!

Those who disagree have way too much to hide. Besides, Wikileaks only exposes criminals, some of whom have been prosecuted due to Wikileaks exposure.

It looks as though the only ones not prosecuted are the PEDOPHILES!

When do you suppose Jeff Sessions and Christopher Wray are going to at least investigate all of the incriminating evidence against Obama, the Clintons, the Podestas, James Alefantis, Jeffrey Epstein, Laura Silsby…?

Would it be the same reason Ben Swann disappeared from Reality Check and all of his social media sites went black, that they have decided to do nothing – except run after Assange?

The Word of God says,

“Woe unto those who call evil good, and good evil; that put darkness for light, and light for darkness; that put bitter for sweet, and sweet for bitter!” Isaiah 5:20.

“It would be better for him to have a millstone hanged about his neck and be cast into the sea, than he should offend one of these little ones” Luke 17:2.

What is worse than drowning with a millstone on your neck?

During the pope’s persecutions against Protestants in the valleys of Piedmont, Peter Symonds, about eighty years of age, was tied neck and heels and thrown down a precipice. During his fall, the branch of a tree caught hold of the ropes that fastened him and suspended him in the midway, so he languished for several days and miserably perished of hunger (it would have actually been an extremely excruciating death of dehydration).

The Catholic Church has never issued an apology for the crimes committed during the Inquisition and the brutal murders of Protestant Christians who denounced papal authority, denied Purgatory, the selling of indulgences in sin, the worship of idols, prayers to the saints and the Virgin Mary. Neither has any reparation been made to the heirs of the saints who suffered such persecutions from the Catholic Church. Protestants were brutally murdered by Catholics by way of burning them alive at the stake, flaying alive, hangings, cutting them to pieces, burying them alive, drowning, torturing them on the rack, whereby bones were broken and bodies ripped apart, beheading them, etc… The property and assets were seized of those heinously murdered by the Catholic Church from about the Twelfth Century through around the 1820s. The Vatican sits atop the blood of the saints. Revelation 18 describes her brutal end for heresies and having committed such abominable crimes.