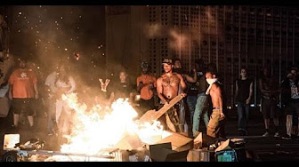 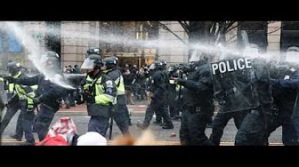 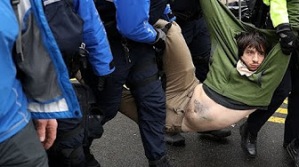 Before they might have accepted George Soros’s “riot funding,” Inauguration Day rioters should have considered who is now in office.

It certainly isn’t do-nothing Obama and his lawless cronies, who opened our borders to criminals, repeat felons, murderers and Muslim terrorists, only to have them end up killing many of our citizens and their children!

No, it is now President Donald J Trump in the Oval Office, the one who gives God all of the honor and glory He deserves, and who will NOT put up with rioters who injure people and their property and pose a danger to our police officers!

Americans have a new State Department, a new Attorney General, a new FBI Director with the same ideology President Trump: commit the crime, YOU WILL DO THE TIME!

The restored US Attorney’s Office issued a statement that felony rioting is punishable by up to 10 years in prison and a fine of up to $250,000.

Many, many thanks to our new President and law enforcement agencies.

If you are one of the 230 protesters arrested on Inauguration Day, you might try to get in touch with George Soros and ask him if he is going to do your time and pay your fine!

George Soros is legendary for “making and breaking” nations around the world with his billions and “insight.” Since conservative Donald Trump won the presidency, headlines reported that Soros has plans to unseat President Trump. Soros, however, should carefully consider what the Word of God has to say about that:

“Daniel answered and said, Blessed be the name of God forever and ever, for wisdom and might are His, and He changes the times and seasons; He removes kings and sets up kings; He gives wisdom to the wise and knowledge to those who have understanding” Daniel 2:20-21.

God has seen the injustice, He heard the prayers of His people throughout this nation and He answered our prayers. We no longer have a president in America that allows lawlessness, keeps his mouth shut against those who slaughter Christians in the Middle East in the most heinous ways, who no longer allows Muslim terrorists to enter our nation and blow up our citizens, nor will he allow illegal aliens to enter this country who have criminal records and who kill and maim our citizens and their children!

We, the American people of these United States, have a new President whom God Himself has placed into office, who will uphold our laws, our United States Constitution and our Bill of Rights!

“I know your works, behold, I have set before you an open door, and no man can shut it, for you have a little strength and have kept My Word and have not denied My Name” Revelation 3:8.

This is a passage of scripture that American Christians can hold dear to their hearts today. God heard, God saw, and God acted in our behalf to set a President in office that would honor Him and work to serve and protect God’s people, until He returns for us!

God bless President Donald Trump, his family and his administration.

As for those who will try to “shut the door” that “God has opened” to His saints, they should take heed. They may be shut behind prison doors, which they will not be able to open – now that there is a law-abiding President in the White House!