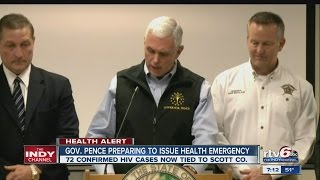 Indiana health officials declared an HIV epidemic last month amidst a rapid rise in confirmed HIV cases, which have now been linked to Opana, a prescribed opiate for pain.

There are 120 confirmed HIV cases, with 10 preliminary positive cases, from 106 cases last week, reported the Indiana State Department of Health.

Governor Mike Pence, in response, has approved a “needle exchange program” for drug users “to help combat the problem,” many of which are recreational users.

Opana is a brand name for oxymorphone, manufactured by Endo Pharmaceuticals (as in “End of your life” maybe?). The drug’s stated use is for chronic pain, but doctors can prescribe it for short-term pain symptoms.

If people are abusing this drug and taking it intravenously, they have to modify the drug, which is sold in an extended-release tablet form.

HIV is spread when an HIV infected person shares his/her hypodermic needle with someone else. It is highly unlikely that HIV infected users would share their needles with enough people in Indiana to cause such an outbreak.

If recreational users are abusing Opana by shooting it intravenously, why should the governor approve a needle exchange program to “combat the problem?” If the possibility of being infected with HIV is not a strong enough deterrent for sharing infected needles, why should the governor approve needle exchanges for this illegal activity? That is like saying, “If you won’t stop getting deadly HIV by sharing needles, let us give you needles so you can continue your illegal activity, increase your risk of addiction and, when we stop giving you free needles, you can all go back to sharing your infected needles in vastly greater numbers,” which will eventually cause more deaths in the long run.

How stupid is that?

Since HIV infected persons are not likely to share their dirty needles to the extent of causing this epidemic, what would be the alternative cause? We can at least trace the depopulation agenda back to the early 1900s, when the Rockefellers promoted eugenics. In fact, Adolph Hitler found the Rockefeller eugenics program in the US to be so intriguing, he adopted their eugenics for genocidal purposes, thereby deposing 6 million Jews and about 5 million other “undesirables.”

By the way, the Rockefellers and other like-minded eugenicists own a major portion of the multitrillion-dollar pharmaceutical industry. (We should all be able to figure this one out, as well as similar schemes.)

For numerous reasons, it is much more likely that Opana is infecting people with HIV, rather than HIV infected people spreading HIV by sharing dirty needles with others.

A good example of what this type of needle exchange program will do to the Indiana drug users at some point is revealed in the crisis unfolding right now in Crimea.

Let’s just put it this way, pulling the methadone suddenly from an already physically and emotionally compromised drug addict is like cutting the insulin from an insulin-dependent diabetic. The condition is immediately life-threatening for many and, without a miracle from God, a lot of these people are dying right now.

The first thing that happens in a Socialist, Communist, Marxist, Fascist takeover is PEOPLE START DYING.

Skeptical? You might want to visit this link for the facts and documentation: Death by Government (democide statistics). Nearly 174,000,000 people have been slaughtered by their own governments in the 20th Century, 1900-1999. The United States is not immune, if Americans do not repent, turn to God and take a firm stand for Godly principles, the United States Constitution, and against this uprising totalitarian government.

Socialists, Communists, Marxists and Fascists all start out as Liberals, now referred to as Progressives. Barack Hussein Obama moved up from the Liberal sect quite some time ago. Before starting his presidential campaign, he was openly a member of the Socialist New Party. Once he launched his campaign, he moved into the Socialist-Marxist closet.

If the Bilderberg Group places Hillary Clinton in office next, the nation will continue to decline and crash, unless a lot of people repent and God intervenes.

Hillary completed her college thesis on Saul Alinsky’s Rules for Radicals, which he dedicated to Lucifer – literally. “Alinsky ideology” also happens to be a favorite of Obama’s. Hillary and Obama are evil cohorts in their objective to bring America under a totalitarian governance, an antichrist regime.

“The vile person shall no more be called liberal, nor the churl said to be bountiful, for the vile person will speak villainy and his heart will work iniquity, to practice hypocrisy and to utter error against the Lord, to make empty the soul of the hungry and he will cause the drink of the thirsty to fail. The instruments of the churl are evil; he devises wicked devices to destroy the poor with lying words, even when the needy speak right” Isaiah 32:5-7.

“Is not your wickedness great and your iniquities infinite? For you have taken a pledge from your brother for no reason and stripped the naked of their clothing. You have not given water to the weary to drink and you have withheld bread from the hungry…You have sent widows away empty and the arms of the fatherless have been broken” Job 22:5-7, 9.

“He causes all, both small and great, rich and poor, free and bond, to receive a mark in their right hand, or in their foreheads, that no man might buy or sell, except he who has the mark, the name of the beast (final antichrist), or the number of his name. Here is wisdom. Let him who has understanding count the number of the beast, for it is the number of a man, and his number is six hundred, sixty-six” Revelation 13:16-18.

Before the antichrist can subdue America, or any other nation, he must cripple it.