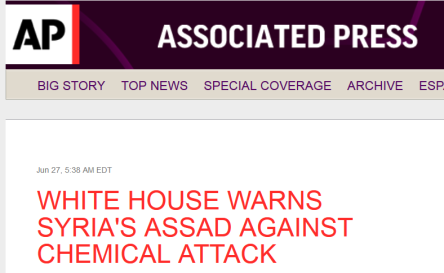 PROPAGANDA MAY BE PRELUDE TO STRIKE AGAINST ASSAD

This is FAKE NEWS, propaganda, and it may have been launched by the White House in an effort to justify more strikes against Assad.

It seems the Luciferian Liberal US Intelligence continues to blindside President Trump concerning Syria’s President Bashar al-Assad, or Trump is acting on his own, while the REAL genocidal maniacs run rampant in Syria.

The only ones apt to threaten with chemicals are Islamic State and Syrian “rebel” terrorists, certainly not President Assad. 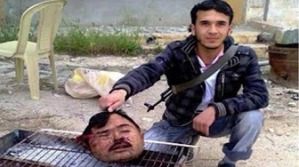 Syrian “rebel” beheads Christian in Syria. Does this look like a “conservative” Muslim to you, as Obama and this administration would have you believe? Understand what the real truth is!

It would be a great relief to see this nation fight against the REAL brutal, sadistic, maniacal Islamic State beasts and Syrian “rebel” terrorists, instead of President Bushar al-Assad.

Were Christians slaughtered in Syria before ISIS invaded? No! The brutality against Christians and the conservative citizens of Syria started with Obama-funded ISIS and Syrian “rebel” terrorists, and it continues to this day.

Yes, Obama is gone, but his cohorts remain throughout US Intelligence, the military, CIA and the FBI.

It appears we are seeing propaganda rising against Syria’s President Bashar al-Assad in order that they, certain factions within our government, can attempt to legitimize taking him down.

This is absolutely despicable and disgusting, especially while there are REAL ENEMIES to fight.

“Hear, I pray you, oh heads of Jacob and princes of the house of Israel, is it not for you to know judgment, who hate the good, and love the evil?…Then shall they cry unto the Lord, but He will not hear them; He will even hide His face from them at that time, as they have behaved themselves ill in their doings…Hear, I pray you, heads of the house of Jacob and princes of the house of Israel, that abhor judgment and pervert all equity. The heads thereof judge for reward and the priests thereof teach for hire and the prophets thereof divine for money, yet will they lean upon the Lord and say, Is not the Lord among us? No evil can come upon us. Therefore shall Zion, for your sake, be plowed as a field, and Jerusalem shall become heaps, and the mountain of the house as the high places of the forest” Micah 3:1-2,4,9-12.

The Prophet Micah was speaking here against the false prophets, priests and princes of the house of Israel, who issued unrighteous judgments for gain. He said Jerusalem would become heaps for those things, and it did.

Iran publicly spews forth threats against Israel and America, but what has America done? Obama issued BILLIONS of dollars to Iran in return! Iranians shout “Death to Israel; death to America” in their public squares, but what did Barack Hussein Obama do? He conjured up a nuclear agreement with them, to allow them to formulate nuclear weapons against Israel and the US!

Christians lived peaceably in Syria for the last seventeen years during Assad’s presidency, and Assad has never been aggressive towards America. What happens to Assad for that?

Doesn’t it sound strange to anyone that Christians and Americans were never threatened by Assad, but now Assad is being accused of crimes against humanity?

Assad is not a vicious terrorist, and he is friendly to, even protective of the Christians in Syria. That is a fatal crime, according to Muslim terrorists. Obama and Muslim terrorists want Assad taken down, so what does that say about Obama?

What will that tell us about President Trump, if he proceeds to take down Assad? That would mean he is either ill advised by his Intelligence forces, or, God forbid, he has lied to the American people. I don’t believe it is the latter.

In summary, Iran threatens America constantly and they kill and oppress Christians, so Obama blesses them with billions of dollars and freedom to create nuclear power (bombs!). 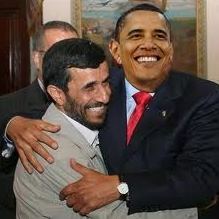 Syria is quiet and never threatens America before Obama-backed ISIS and “rebels” show up, slaughtering Christians in the most heinous ways and fighting to take down Assad. Now, Assad is blamed for all of the mayhem!

A lamebrain can figure this out.

Listen, folks; if Israel didn’t get away with casting unjust judgments against the weak and defenseless, trust me when I tell you that no one is going to get away with blessing Iran (blessing pure evil), or cursing Assad (who has defended Christians)! God will not exact judgment against Israel for their injustices, but allow Obama, or Trump, to get away with this evil against President Bashar al-Assad!

“A proud look, a lying tongue, hands that shed innocent blood, a heart that devises wicked imaginations, feet that are swift in running to mischief, a false witness that speaks lies and he that sows discord among brethren” Proverbs 6:17-19.

It is commendable that President Trump upholds the name of the Lord in America (Israel did the same, according to Micah, while they judged falsely, and God brought judgment against Israel).

Whatever our military does, or does not do, in the Middle East, President Trump is ultimately responsible, because he is Commander in Chief.

Let us pray for President Trump that he issues just orders concerning Bashar al-Assad, because God is watching, and He requires justice, whether we lift up His Holy Name, or not!