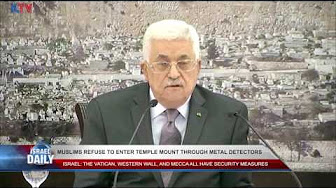 Prime Minister Benjamin Netanyahu is not completely to blame for backing down. Arab Members of Knesset cranked up the heat to remove the security features. One in particular, MK Osama Saadi, warned that “the whole Arab world will rise up as one” against Israel if the metal detectors are not removed from the Temple Mount.

There are 17 Arab members of the Knesset. What Muslim nation do you know that has even one Jewish lawmaker?

Last year, three Arab Knesset members were suspended for visiting terrorists! How much more absurd can Israel’s bowing down to Muslim terrorists get?

There is no fairer Democracy in the entire World than Israel’s, but they are still criticized by the incessantly whining Muslim terrorists – and the Arab owned UUN (Useless United Nations).

I won’t belabor this; I’m headed right to Bible prophecy on this one:

Numerous prophets of old, Isaiah, Ezekiel, Daniel, Zechariah, told us that the enemies of Israel would come against Israel in the latter days.

The leaders of Israel, and all the nations of the world, can continue to appease Muslim terrorists, who are famous for killing men while their hands are tied behind their backs, or during an ambush when a victim least expects it, or during a holy day when Israeli Defense Forces are honoring God; but God will soon destroy these cowards, and their worship of Lucifer the moon god, once and for all.

No? Okay, sniveling cowards who serve Lucifer and kill in the cruelest ways, only when a man’s hands are tied behind his back, your day of chastisement is coming!

When Muslim nations, along with Russia, converge upon Israel in these last days, God Himself has reserved this Day of Vengeance to set you on fire in the mountains of Israel. You will be so decimated that it will take Israel seven months to find and bury your body pieces (Ezekiel 39:12-16)!

“After many days, you will be visited (Russia, Persia (Iran), Ethiopia and Libya). In the latter years you will come into the land that is brought back from the sword and is gathered out of many people, against the mountains of Israel, which have always been waste, but it is brought forth out of the nations and they shall dwell safely, all of them. You will ascend and come like a storm; you shall be like a cloud to cover the land, you and all your bands, and many people with you…And you will come up against My people of Israel, as a cloud to cover the land; it shall be in the latter days, and I will bring you against My land, that the heathen may know Me, when I will be sanctified in you, oh Gog (Russia), before their eyes. Thus says the Lord God, Are you he of whom I have spoken in old time by My servants the prophets of Israel, which prophesied in those days many years that I would bring you against them? And it shall come to pass at the same time when Gog shall come against the land of Israel, says the Lord God, that My fury shall come up in My face…And I will call for a sword against him throughout all My mountains, says the Lord God; every man’s sword shall be against his brother (you and your allies will kill one another with “friendly fire”). And I will plead against him with pestilence and with blood, and I will rain upon him, upon his bands and upon the many people that are with him, an overflowing rain, great hailstones, fire and brimstone. Thus will I magnify Myself and sanctify Myself and I will be known in the eyes of many nations, and they shall know that I am the Lord” Ezekiel 38:8-9,16-18,21-23.