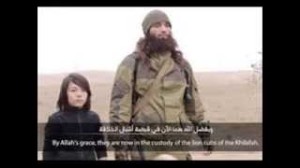 Earlier this month, the United Nations reported that the Islamic State terrorists are selling Christian, Shi’ite and Sunni children at markets as sex slaves.

“Children of minorities have been captured in many places, sold in the market place with tags, price tags on them, they have been sold as slaves,” UN Committee on the Rights of the Child expert Renate Winter reported.

“We have had reports of children, especially children who are mentally challenged, who have been used as suicide bombers, most probably without them even understanding,” reported Reuters.

Reuters reported that Islamic State “militants” are selling abducted Iraqi children, and they are killing other children by crucifixion, or burying them alive!

It is detestable that propagandized media has the audacity to describe these barbaric fiends as “militants,” using Obamized politically correct vocabulary to describe those who commit such heinous and vicious acts of cruelty!

“Let it be clear,” these are Muslim terrorists!

Women are being sold as sex slaves, women and children are being starved and many are dying of thirst, hunger and from exposure to the heat.

We, who are Christians, know that the end of time is very near, in that Jesus said to His disciples, as He described the time of His return,

Know this, friends, we are living in the very time Jesus spoke of regarding His return and He could return at any moment!