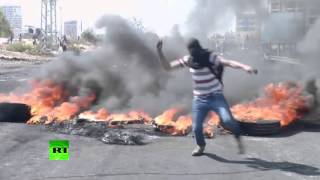 Palestinians in East Jerusalem have continued their onslaught of attacks against Jews since last month during Rosh Hashana, and the violence just doesn’t stop this time.

The youth especially in East Jerusalem have been slinging rocks, wielding knives, stabbing Jews and tossing Molotov cocktails. Eight Israelis have died during the attacks in recent weeks.

What is revolting, beyond the deadly brutal attacks against Jews, is the complacency and even the downright sympathy the mainstream media in the United States is lending the Palestinians, yes, the Palestinians who are killing Jews!

The New York Times published an article on October 17, written by Jodi Rudoren, which barely mentioned the violence perpetrated against the Jews, but rather focused on the “frustration” of Palestinians! She emphasized the frustration of businessman, Abu Hamed, who lives in East Jerusalem, with a view from his home of the Jewish “enclaves,” which he claimed “were built on our lands.” She wrote about his complaints of the “ugly barrier Israel erected” that splits Sur Baher from the West Bank. She further documented his complaints about seeing Israeli soldiers, who blocked two of the neighborhoods exits and set up a checkpoint.

Rudoren wrote about more of Hamed’s complaints, together with his statement, “You have a lot of evidence that you are not a human being.”

I can tell Mr. Hamed very simply how to get rid of all that “frustration” about Israeli police. Mr. Hamed should really try to convince his neighboring Palestinians to stop attacking and killing Jews savagely in the streets like wild animals, and maybe he won’t have to be so distressed about those “ugly barriers,” or the checkpoint in his neighborhood!

Rudoren had the audacity to continue writing about Hamed’s lame complaints amidst deadly attacks against Jews.

She also wrote, “The violence is a consequence of years of feeling like neglected ‘stepchildren’…,” as if that is some valid reason for the Palestinians to stab people to death, wage other vicious attacks and set the city on fire with Molotov cocktails! This woman is absurd!

She went on to write, “They do not feel wanted…”

If Ms. Rudoren had neighbors that tossed bombs into her yard and tried to stab her, or throw large stones at her when she walked down the street, I can’t imagine she would justify those attacks by saying her neighbors don’t feel wanted!

Rudoren went on to write about how the Jews captured Jerusalem in 1967, and she stated much of the world, and the UN, “consider the territory occupied.”

She made absolutely no mention of the fact that Israel is attacked by surrounding Muslims each and every time they recover more of their own land, which was granted to them by God (Genesis 15)!

At the end of her report, Rudoren alleges all of the recent violence started with the killing of a Palestinian youth by “Jewish extremists.” She emphasized in her closing statement that Mr. Hamed cries when he goes through security, because his Hebrew University ID card “means nothing.”

Hay, buddy, you wouldn’t even get a university card in my town, if I had anything to say about it, so you should stop your sniveling. Instead of crying about what you believe is discrimination, you should be crying about your vicious people, who are intent on killing every Christian and Jew for no reason, other than the fact that they are Christians and Jews!

“Woe unto them that call evil good, and good evil; that put darkness for light, and light for darkness; that put bitter for sweet and sweet for bitter” Isaiah 5:20.

When God’s Word says, “Woe,” people need to watch out for hell fire, because of their evil doings.

According to Bible prophecy, hatred and war will come against Jerusalem in the last days, before the Lord’s return.

This is what is happening right now. Rampant lies told by the media and the influence of oil-bearing Muslims have the rest of the world turning their backs against Israel; but remember, all those, even though it be the entire world, who burden themselves with Jerusalem, will be cut to pieces!

God is a just God and He exacts just judgment against evil in the end.