GAGA AND PAST PRESIDENTS

Five former United States Presidents gathered Saturday evening at an event to raise money for disaster relief, which was a very good thing.

The former presidents, Jimmy Carter, George H W Bush, Bill Clinton, George W Bush and Barack Obama, posed for a photo with “Lady” Gaga during the One America Appeal fundraiser, which was a very bad thing.

They raised $31 million, which was a very good thing, but they could have collectively given that much, without hurting, and chucked the idea of Gaga.

Lady Gaga is enamored with Marina Abromovic, as are other Luciferians throughout DC and Hollywood, and she is so ravaged with reproach, she isn’t fit to be seen with, let alone with a US President.

These photos speak for themselves: 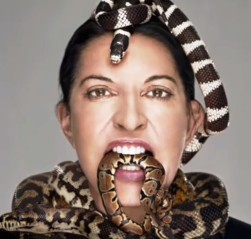 The details of spirit cooking events are so vulgar and gross, I really can’t articulate what the event entails on this website because of the content.

Enough said about Gaga. She isn’t self-made; feel pity for her. Gaga has been so degraded in media recently, the Illuminati is obviously trying to salvage her image with the photo op.

Actually, the presidents seen with Gaga in the photo above aren’t self-made either and their histories are just as muddy and nasty as Gaga’s, if not worse:

Jimmy (PLO) Carter used to be dubbed America’s worst president, until Barack (stealthy jihadi) Obama took the title. George (New World Order) HW Bush and George (9-11) W Bush are both members of Skull and Bones. Then there is Bill (rape all the women you can and kill all your body guards) Clinton.

So, what we are actually seeing in the photo above are “birds of a feather” simply flocking together.

Before they disgust us with another dingy photo gallery, let’s hope they just let go of a few million, among their billions, for charity and spare us their appearance.

“He lies in wait secretly, as a lion in his den; he lies in wait to catch the poor; he catches the poor, when he draws him into his net” Psalms 10:9.

“The good man has perished out of the earth and there is none upright among men; they all lie in wait for blood; they hunt every man his brother with a net” Micah 7:2.

This will continue, until the Lord returns, but the wait is almost over.

* Please provide attribution to this site via link.