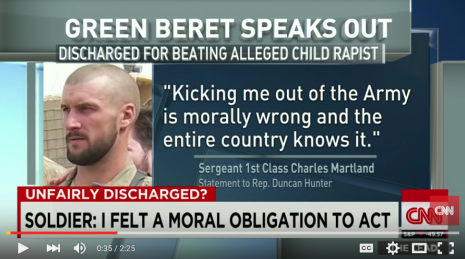 Remember the returning Vietnam Veterans who were harassed, cursed and even spit upon by Progressive-Liberal, Communist, Socialist, Marxists? I make this reference to all of them, because they are all involved together in the Luciferian globalist scheme.

Many of those Vets had no choice, because they were drafted by the same globalists, who in turn, arranged for them to be ridiculed when they came back home.

Other Vets, given a choice, would have rather done anything else than walk into that useless, deadly war.

This is a slow demoralization program against our military troops, perpetrated by the same people who would secretly arrange for the deliberate slaughter of our elite Navy Seals.

Why, you might ask? Because they are power-mongers and the Navy Seals are a threat to their tyranny and their destruction of the United States Constitution.

I don’t even have space here to get into the cover-ups involved in the deaths of 22 elite Navy Seals, and eight other Americans, killed in a helicopter in Afghanistan on August 6, 2011. I have written about that tragedy, and the conspiracy surrounding the deaths of many Navy Seals during Obama’s “presidency.” This Michael Savage video provides a short summation of their murders.

Let’s take Green Beret, war hero, Sergeant First Class Charles Martland, for example. While serving in Afghanistan on an American base, an Afghan commander admitted to him that he chained up a 12-year-old boy and raped him repeatedly.

The honorable Sergeant Martland beat the “stuffing” out of the Afghan devil, which was the admirable thing to do. So, the Army is setting about to discharge him. Frankly, the pedophile deserves to die and, equally so, all those like him (Matthew 18:6).

Barack Hussein Obama doesn’t think so. He obviously gives his blessing, being “Commander in Chief,” but what else is new? That’s exactly what stealthy Muslim Brotherhood terrorists do.

Americans, all of us, need to stand behind Sergeant Charles Martland right now. The American Center for Law and Justice (ACLJ) is fighting on his behalf.

The Progressive-Liberal Luciferians only act peaceably, and they will also tell you they want your guns for the “peace and safety” of all citizens – with a smile on their faces.

The Bible tells us,

“When they shall say, Peace and safety, then sudden destruction will come upon them, as travail upon a woman with child, and they shall not escape” 1 Thessalonians 5:3.

Purchase the book, Death by Government, if you can get a copy, or watch the video here, and you will know what I’m talking about.

The real truth behind their hypocrisy and deceit is they don’t want you to be able to defend yourself and your families, as they begin enslaving you under their global tyranny.

Jesus said to His disciples, knowing Rome would conquer Jerusalem and slaughter many,

“He said to them, But now, he who has a purse (supply bag), let him take it, and likewise his scrip (wallet), and he that has no sword, let him sell his garment and buy one” Luke 22:36.

Hillary generally has a smile on her face, but the only thing you need to do to find out who she REALLY is, is have an understanding of who Saul Alinsky was and what his book, Rules for Radicals (dedicated to Lucifer), is about; and you will discover, if you haven’t already, who the woman-beast truly is. Hillary did her college thesis on Alinsky’s ideology. She is a rabid Alinsky radical – and she’s up next!

If she becomes President of the United States, she will waste no time trying to get your guns; you can count on that.

You can take His words to the bank.