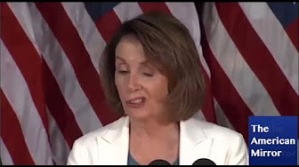 Pelosi seems to have something going on with her mouth – consistently

While speaking at The Commonwealth Club in San Francisco, House Minority Leader Nancy Pelosi, for the third time, referred to the current president as George Bush. She said, “For decades I’ve served in Congress and for decades I’ve had to fight the Republicans’ opposition to birth control, contraception and family planning. They don’t believe in – – – it, and a lot of those people voted for George…for, what’s his name…?”

The audience broke out in laughter just watching her mess up and wave her hands all over the place, as she struggled to articulate complete sentences and even remember who the current president is! Perhaps they keep inviting her back to get a good laugh.

One could almost feel sorry for Pelosi, except for the fact that she refuses to step down, costing taxpayers her six-figure salary every year, as she does nothing for the American people in exchange. Another good reason not to feel sorry for Pelosi is that she is ruthless when it comes to the slaughter of the unborn – and the born! Which is all the more disgusting as WND recently reported Planned Parenthood doctors joking about decapitating the heads of babies, how their eyeballs fall out, etc!

Next we have Representative Maxine Waters ranting everywhere about President Donald Trump “wrapping his arms around Putin,” although she doesn’t have any evidence to back up those statements, but she knows it’s true!

Waters seems to have something going on with her mouth too!

Again, we see Senator Elizabeth Warren taking on a bewildered appearance, as she is asked to provide detailed answers to questions about how hundreds of millions of dollars will be spent by the Consumer Financial Protection Bureau. Representative Jason Chaffetz simply asked her about the particulars of her agency’s spending, which do not appear on the bureau’s website, or in their report to the Appropriations Committee. She appeared astonished that he would ask such questions and consistently provided evasive answers.

Warren was also kicked off the House floor recently for bashing then Senator Jeff Sessions, who is now the US Attorney General. She was told to stop and leave the podium!

Can you believe it? Warren also has something going on with her mouth!

These Representatives all demonstrate similar behaviors, confusion, groping for words, lapsing into a state of complete forgetfulness, rambling, flailing their arms around, excessively using their hands to articulate and making statements out of context. They even use an elementary vocabulary at times.

Perhaps these are vile side effects from “young blood” infusions, which are popular among the Luciferian elite. The scientific community would have no data on the (wrath of God) side effects from young blood infusions, but they are very real just the same. Scientists have no knowledge of the spiritual consequences of such evil.

“Do you not know that your bodies are the temple of the Holy Ghost, which is in you, which you have from God and you are not your own? You are bought with a price, therefore glorify God in your body and your spirit, which are God’s” 1 Corinthians 6:19-20.

If God has given his saints confidence, power and a sound mind, what do you suppose will be given to those who oppose God’s commandments?

That’s right, just the opposite.