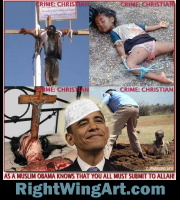 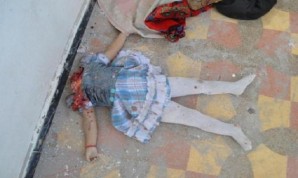 Excerpts taken from the Daily Mail

Australian jihadist Mohamed Elomar posed with a big smile on his face for a photo while holding two decapitated heads, which his friend, convicted terrorist Khaled Sharrouf, posted on Twitter yesterday.

As he posed, he stood next to a bucket containing two other heads. Elomar tweeted,

“bucket full of heads any1 in aus want some organs please don’t be shy to ask I would love to assist u with body parts. Few more heads how lovely bludy amazing stuff abuhafs u keep cutting those infidel throats but the last 1 is mine!”

Who are the infidels Elomar is speaking of? Muslims say that Christians, Jews as well as all non-Muslims are infidels.

Unless you are willing to bow down to their god, you should brace yourself, because they are planning to come here next.

YouTube.com has at least 103 videos by terrorists beheading and torturing Christians and others they consider to be infidels.

Does anyone suppose they have protection from Muslim terrorists here in the US? This is a good time to be reminded that we have one sitting in the White House who not only celebrates all the major Muslim holidays (cutting out to Hawaii at Christmas) and entertains Muslim terrorists, such as the Muslim Brotherhood, in the White House, but who also has worn his ring of allegiance on his wedding finger for many, many years, which is inscribed, “There is no god but Allah” in Arabic. 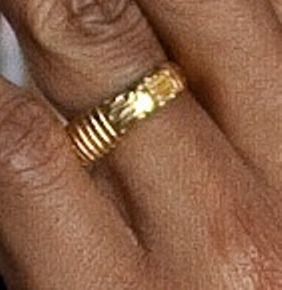 In the meantime, you have the Department of Homeland Security Adviser Mohammed Elibiary tweeting, “America is an Islamic country” and “It is inevitable that Caliphate returns.” 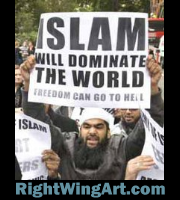 If you are unfamiliar with Muslim Caliphate, it is important to look it up, because Obama’s DHS adviser said “it is inevitable.”

Does anyone have any more doubts about where this country is heading?

They are opting to place Hillary Clinton in the White House next and she has taken full credit for throwing our US Ambassador to Libya Christopher Stevens, US Foreign Service Information Manager Sean Smith and two other CIA contractors, Tyrone Woods and Glen Doherty, former Navy Seals, who fought heroically to save 20 administrative personnel in the Consulate, under the “jihad bus;” all the while she is throwing up her “bloody hands” during Congressional hearings, saying, “What does it matter?!” 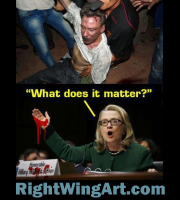 She isn’t the main person to blame; that would be Barack Hussein Obama. She is his cohort, and therein lies her guilt, but she is not the Commander in Chief; that would be our rogue “president.”

Another image that was posted Friday showed the heads of three Syrian soldiers impaled on the spikes of a fence in Syria.

The photos at the top of this article are not fake; the torture, beheading and crucifixion of Christians, and anyone else Muslims considered to be infidels – including CHILDREN – is very real.

This kind of mayhem is happening all over Syria, Iraq and other Muslim nations, but has Obama spoken out against the decapitations of Christians, or even the torture of Christian children? Did he speak out against the child sawn into pieces alive in Syria last year? No! He, in fact, made certain the jihadists acquired billions of dollars worth of US tanks and artillery in Iraq recently.

Obama is speaking out for amnesty for millions of future supporters devoted to the Democratic-Socialist regime he attempts to establish in the US by the time he leaves, if he ever leaves the White House.

Just as he was against bills to end the slaughter of newborns who survived botched abortions, in fact vetoing not one, not two, but three bills presented to save newborns from a horrifying and agonizing death as Senator of Illinois, he also has nothing to say about the slaughter of Christians, or Christian children, in Syria and throughout the Middle East.

Why do you suppose that is? This behavior of the illegal noncitizen “president” we have sitting in the White House should alarm all Americans.

“Then shall they deliver you up to be afflicted and shall kill you and you shall be hated of all nations for My name’s sake” Matthew 24:9.

The head of the Muslim terrorist organization ISIS, after acquiring billions of dollars worth of US military equipment in Iraq – left at their disposal by Barack Hussein Obama – said, “I’ll see you in New York.”

The Word of God tells us that Christians will be beheaded throughout the entire world,

“He causes all, both small and great, rich and poor, free and bond, to receive a mark in their right hand, or in their foreheads, that no man might buy or sell, save he who had the mark, the name of the beast, or the number of his name. Here is wisdom. Let him who has understanding count the number of the beast, for it is the number of a man, and his number is six hundred, sixty-six” Revelation 3:16-18.

“I saw thrones and those who sat on them and judgment was given unto them; and I saw the souls of those who were beheaded for the witness of Jesus and for the Word of God, which had not worshiped the beast (antichrist), neither his image, neither had received his mark upon their foreheads, or in their hands, and they lived and reigned with Christ a thousand years” Revelation 20:4.