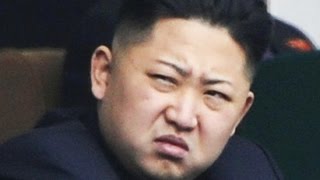 The North Korean government informed citizens on Monday to prepare for famine and severe economic hardship, as the United Nations Security Council mounted stiff sanctions against the country for their nuclear threats.

In the meantime, Iran’s Ali Khamenei publicly states Iran will not only annihilate Israel, but also strike America (Big Satan), even as Obama closed the nuclear deal with Iran.

It is interesting that the UN has not imposed any sanctions on Iran for their nuclear threats against Israel and the US, but has already sanctioned North Korea.

On the contrary, the UN backs Obama’s support of Iranian terrorism, as billions of dollars have been released to Iran since the nuclear agreement.

While the fat little North Korean tyrant is making sure everyone forfeits two pounds of their precious rice each month for his fat behind, he is at least being up front about it! He is telling them they have to give his fat hind-end two pounds of rice, while he obviously gorges, and he told them to brace themselves for famine, as if they aren’t already emaciated.

On the other hand, Obama is herding Muslim jihadis into the nation faster than you can shake a fist, while CAIR is campaigning to get as many Muslims registered to vote as they can possibly cram into their mosques; but you will never hear Obama tell the US citizens to brace themselves for the Islamic terrorism that’s coming!

Obama never warned the “poor” and “middle class” that they would soon be in tents after he took office.

Screen shot: YouTube.com
Hillary, in the meantime, already has her Islamic entourage prepped and ready to replace Obama’s Muslim Brotherhood administration, assuming she will take office. No, she won’t tell US citizens that they are being set up for terror either.

Obama tries to hide his allegiance to Islam, his conspiracy against the US and his fraudulent birth records.

Kim and Obama are both unconscionable tyrants. One is a habitual liar and a fraud, the other is not. Am I defending Kim? Absolutely not; he is among the worst of the worst. Placing him alongside Obama, however, simply reveals he is no hypocrite.

“The vile person will speak villainy and his heart will work iniquity, to practice hypocrisy and utter error against the Lord, to make empty the soul of the hungry and he will cause the drink of the thirsty to fail” Isaiah 32:6.

Obama hides his plundering of this nation, plunging it into the worst financial ruin since the 1930s. The Bilderberg media shut down publication of the tent cities and homelessness throughout America, but it is staggering. There has never been anything like it since the Great Depression. The Bilderbergers accomplished it through their muppet Obama, and they plan to use Hillary next.

It will only be the grace of God if Donald Trump can turn things around for America.

“When they shall say Peace and safety, then sudden destruction comes upon them, as travail upon a woman with child, and they shall not escape” 1 Thessalonians 5:3.