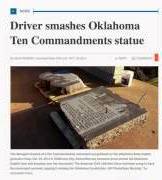 MAN URINATES ON AND RUNS OVER TEN COMMANDMENTS MONUMENT

Twenty-nine-year-old Michael Tate Reed Jr from Roland, Oklahoma, urinated on the Ten Commandments monument on the grounds of Oklahoma’s State Capitol Thursday evening, then drove his car into the monument, crushing it to pieces. He said he is a satanist and the devil told him to do it.

The American Civil Liberties Union (ACLU) previously filed a lawsuit to have the monument removed, stating it violates the Oklahoma Constitution, which bans the use of public property to support any sect, church, denomination or system of religion. The ACLU lost their case in Oklahoma, but has appealed to the Supreme Court.

“You shall be hated of all men for My name’s sake, but he that endures to the end shall be saved” Matthew 10:22.

Christ will return and set up His righteous kingdom on earth, but until that time, many shall suffer persecution. God’s people will be rewarded throughout eternity for their faithfulness in a world overtaken by evil in the last days.

“The wages of sin is death; but the gift of God is eternal life through Jesus Christ our Lord” Romans 6:23.